Two weeks ago I wrote about the digital edition of The Pageant (1896-1897) prepared by Frederick D. King (The University of Western Ontario). King spoke about the change of the Aesthetic Movement around the time of publication of the two volumes of this magazine that was edited by Charles Shannon and Gleeson White, while Ricketts was deeply involved.

King talked about The Pageant at the North American Victorian Studies Association's supernumerary conference in Florence (17 May 2017). He kindly sent me the text.

According to King, by 1895, the Aesthetic Movement emphasized Decadence and 'evocations of sexual dissidence', but for The Pageant the editors settled for 'art history and the material production of British Aestheticism'. Their selection of essays and artists placed the Aestheticism in a historical frame, comparing contemporary art to that of the Pre-Raphaelites, the French Symbolist movement, and the bookmakers and wood-engravers of the Renaissance.

King analyzed four essays on art, one of which is by Gleeson White, who, in his essay about Ricketts wrote that Ricketts's designs are 'subtle, and do not seek to shock the reader in the manner of a Beardsley illustration'. However, their sensuality and eroticism should be considered to be part of a long tradition starting with the Italian woodcuts of the Renaissance. This way, the importance of the contribution of the Aesthetic Movement to print culture was emphasized. Theoretically, the movement was linked to Walter Pater's theory of the Renaissance.

The Pageant, I would like to add, was not the only magazine that explored these new connections for the Aesthetic Movement. Ricketts's and Shannon's The Dial that had appeared since 1889 was an infrequent witness of their ideas. The last issues were published in 1895 and 1897, and show, not surprisingly, the same shift in focus from Symbolism and Decadent poetry to a broader history of art, especially the Renaissance.


The Dial No 1 (1889) included two essays on French symbolism: (1) 'Puvis de Chavannes' and (2) 'Les Goncourt'.
The Dial No 2 (1892), again, included an essay on Puvis de Chavannes, and contained poems by two decadent French poets: Verlaine and Rimbaud.
The Dial No 3 (1893) presented pieces on symbolist painting ('Gustave Moreau'), decadent poetry (Rimbaud), but also to early Victorian art ('Garth Wilkinson'), and to French Renaissance poetry (Ronsard) and Italian literature ('St Francis of Assisi').
The Dial No 4 (1895) discussed another Decadent French artist (Huysmans), but also contained a poem by Michael Field on Tintoretto.
The Dial No 5 (1897) included a translation from a work by Maurice de Guérin, and contained an essay on nineteenth-century Japanese art by Utamaro.


The shift from Decadent and Symbolist work to a wider perspective including Italian and Japanese art was already manifest in The Dial from 1893 onwards, suggesting that King's interpretation of The Pageant's course was in accordance with Ricketts's and Shannon's artistic development.

Around the same time, Shannon started to work on his Renaissance inspired portraits  and paintings, aspiring to become the Titian of the early 1900s, while Ricketts took examples from continental printing (especially French and Italian Renaissance type, initial letters and decorations) for his Vale Press designs.
Posted by Paul van Capelleveen at 12:30 AM

There are quite a few websites posting information on Charles Ricketts and Charles Shannon as a gay couple, which, historically and factually, poses a few problems of interpretation. Presumption, projection, and suggestion may blossom as there is a lack of evidence. Ricketts was a gay man, and although he never talked about his sexual orientation in public, there is enough evidence of his activities and his preferences. Shannon may have been gay in his early years, but eventually turned out to be a heterosexual, and his lithographs testify of that.

In June, for Pride Month in New York, the Fales Library & Special Collections posted some images of book covers designed by Charles Ricketts.

The introduction to this posting argued their gay identity by using concepts as 'partner', 'lived together', and 'queer luminaries' in order to emphasize their gayness as a couple. However, no collaborative works by Ricketts and Shannon were chosen to illustrate this. The images were of cover designs for books by Ricketts for Oscar Wilde, Thomas Hardy, and Michael Field:

'Ricketts founded the literary journal The Dial in 1889 with his partner Charles Shannon. Shannon and Ricketts lived together at Ricketts’s Chelsea home, The Vale, after which Ricketts’s press took its name. Ricketts associated and worked with late-nineteenth and early-twentieth century queer luminaries of the Aesthetic movement such as Aubrey Beardsley and Oscar Wilde; Beardsley and Ricketts both designed and/or illustrated editions of Wilde works.'

The phrase 'Ricketts's Chelsea home' suggests that he was the main inhabitant, while, in truth both artists had rented the home, and other occupants and fellow artists needed to live there in order for them to afford the rent.

It is good to honour one's heroes, but it is hard to acknowledge facts. In general, the intentions of the introductory text are quite sympathetic even if almost every sentence contains a slip of the pen.
Posted by Paul van Capelleveen at 12:30 AM

Earlier this year, Frederick D. King (Huron University College) wrote about his preparations for a digital edition of the periodical The Pageant. See his blog 'The Pageant, Aestheticism, and Print Culture' on The Floating Academy.

King's 2014 dissertation, called The Book Beautiful: Aestheticism, Materiality, and Queer Books, contains much about Charles Ricketts and Charles Shannon. His blog about The Pageant reveals that he discovered the work of Ricketts through his study of Oscar Wilde, John Gray, and other Aesthetes and Decadents of the 1890s.

The Pageant, according to King, 'repositions British Aestheticism outside of its own brief moment of influence in the 1890s, and into conversation with the history of European print culture with roots in the Italian Renaissance.' King argues that the influence of Early Modern Italian illustrators 'helped to differentiate the Aesthetes from the nationalist interests of their Pre-Raphaelite predecessors'. King links this cosmopolitan approach to condemnations of Wilde's homosexuality: 'By historicizing the movement and bringing attention to Ricketts's Renaissance influences, The Pageant serves as a comment on the philistinism that condemned Wilde and Aestheticism. It accomplishes that feat by demanding that readers also connect Aestheticism's controversies to the broader history of literature, of art, and of print culture.'

Ricketts designed the binding for both volumes of The Pageant (1896-1897) [published 1895-1896], and although he was not mentioned as an editor, he was very much involved in the compilation of both volumes. The art editor was his partner Charles Shannon, the literary editor was their friend J.W. Gleeson White. From their contributions - particularly Gleeson White's study of Ricketts's work published in the first volume - a shared appreciation of Italian art can be deduced. 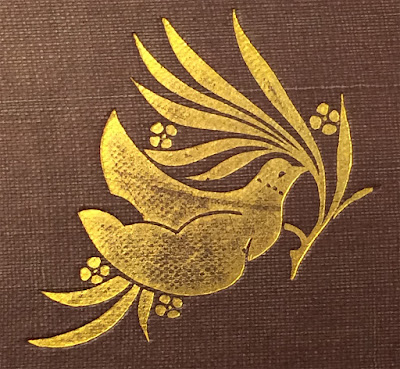 Ricketts designed two small devices for the binding of The Pageant. Both were repeated three times, the one in lower right corner bears his monogram 'CR'.

Meanwhile, the online edition of The Pageant has been launched, and is in open access at The Yellow Nineties Online. The images are based on a withdrawn copy from Huron College Library. The covers of those copies are in bad shape, and show traces of a misguided  restoration effort with tape. The spine has not been reproduced in the online edition, the pages have been cut and do not show the edges of the paper. One would have hoped that better copies could have been digitized.

There is no introductory essay about The Pageant. I hear that will be published later.

The addition of The Pageant to The Yellow Nineties Online is a step forward in disclosing 1890s material to scholars and students.

Last Saturday and Sunday, the Amsterdam International Antiquarian Book & Map Fair hosted an international company of antiquarian booksellers. One of the exhibitors was Sophie Schneideman from London.


Among the treasures on view on her shelves were several Ricketts related books. One of those was a copy of Beyond the Threshold that Ricketts dedicated to Thomas Sturge Moore: 'To T. Sturge Moore from his old friend C. Ricketts.'

A touching dedication from Ricketts's later years, including a phrase that he used for several other friends of long standing. The 'old friends' possibly became even dearer to him when Charles Shannon became disabled after a fall in 1928, a year before the publication of Beyond the Threshold. Due to Shannon's amnesia, Ricketts lost his companion who sometimes even acted hostile towards him. Lonely years followed, and Ricketts died a few years later, in 1931.
Posted by Paul van Capelleveen at 5:40 PM