348. Couples at the Rosenbach

On show at The Rosenbach in Philadelphia is the exhibition Of Two Minds: Creative Couples in Art and History.

This is a collaboration with the Free Library of Philadelphia, and includes works from their collections of children's literature, prints and pictures and rare books. Represented are actors and artists, silversmiths and monarchs, journalists and ornithologists. Among the book artists who closely worked together are William and Catherine Blake, Diane and Leo Dillon, Donna and Peter Thomas, and Charles Ricketts and Charles Shannon.

On show is the Rosenbach copy of William Blake's Visions of the Daughters of Albion (1793). The role of Catherine Blake - feeding the press with paper and hand colouring the prints - is not always acknowledged, and if so, the less subtly coloured prints are attributed to her, even though details about their collaborative efforts are non-existent.

The collaboration of Ricketts and Shannon was certainly intense in their early days. However, each was an artist in his own right, and both signed their own works. Only at the early stages of their careers, one can see a few truly collaborative works, such as Hero and Leander, Daphnis and Chloe, and A House of Pomegranates.

The collaboration on Oscar Wilde's A House of Pomegranates can also be seen as two artists working separately and following their own vocation. Ricketts designed the binding, title page, decorations, and illustrations, while Shannon produced four full page illustrations that were printed as etched relief prints by the Paris firm of Verdoux, Ducourtioux et Huillard.

Ricketts's illustrations can be found in between Wilde's words, on the same pages as the text of these fairy tales, but Shannon's prints are separately inserted.

At the Rosenbach, the beginning of the story of 'The Fisherman and His Soul' is on display. The pages show Ricketts's work only.


The Rosenbach copy is from the bequest of book artist Maurice Sendak - what would he have thought about Ricketts's and Shannon's illustrations?

[Thanks are due to Sara Davis and The Rosenbach for the illustration of the Blake and Wilde books.]

Last week I wrote about the limitation statement of Oscar Wilde's Poems in the 1892 edition. (See blog No 346). Michael Seeney contacted me about the line in relation to Wilde's signature on the same page.

His astute observation is:

One thing that has always puzzled me is the printed line about three-quarters of the way down the limitation page. It seems to serve no purpose, although in my copy (No 1) and the one illustrated in Mason (No 7) Wilde joins his name to the line with a descender from the final 'e'. In other copies I've seen he just leaves the line floating - perhaps he became tired of signing with such a flourish.
The limitation statement seems straightforward as a text. However, its design is more complicated than it seems, and Seeney's remark allows us another look at the page as a whole.

The triangle of small ornaments at the top is positioned almost in the middle of the page (45 mm from the top, 50 mm from the left and 50 mm from the right). To the right is a block of text with written letters, numbers and two floral ornaments: a small ornament in line 4 and another one at the end of line 5. There is an initial 'T' (lines 1-3) and another one, 'N' (line 6-7). There are no divisions between the text lines, but the block has been divided into two parts.

Part one is about the edition size:

This edition
consists of
210 copies,
200 of which
are for sale

The second part is about the individual copy:

The left margin of the two parts of this text block is not straight; it somewhat follows the form of the triangle to the left.

To balance the design on this page, there are two lines: a small one (4 mm) to the right of the second part of the text block, and a longer line (22 mm). The second line is somewhat smaller than the text blocks of which the lines measure 24 to 26 mm.

All these texts, ornaments and lines have been calligraphed by Ricketts, and are printed from a block. No material from the type case has been used.

The purpose of these two lines might have been to obtain an aesthetic balance of the black and white parts on the page, and to achieve a balance of this page with the title page opposite.

After the page had been printed, Ricketts's design served as a certificate of limitation, and each copy was individualized by the inclusion of a number that was handwritten in ink, and each copy was authenticated by Oscar Wilde, the author of the book, who wrote his large signature in each copy. 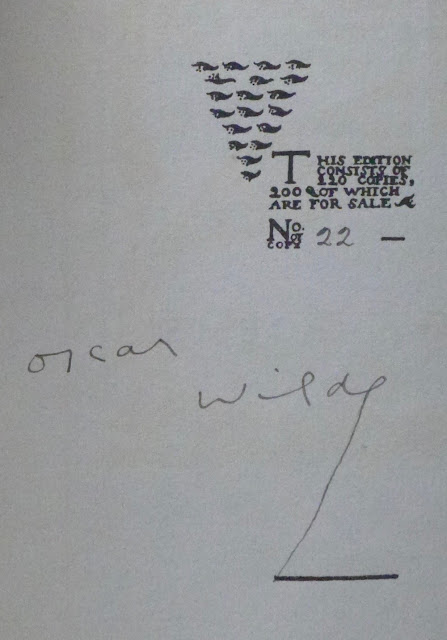 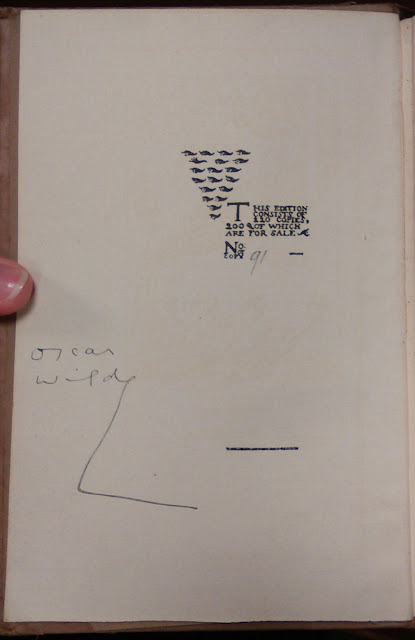 Comparing four copies - No 109 (Christie's, 2012), No. 22 (private collection), No. 91 (Woodson Research Center, Fondren Library), No. 95 (Duke University [reproduced in Nicholas Frankel, Oscar Wilde's Decorated Books, 2000]) - it is noticeable that Wilde's signature appears to the lower left side of the page, with the name divided over two lines, the final 'e' unfinished, and ending in a downward stroke of the pen.

In some cases that pen stroke touches the horizontal line; in some copies the signature appears between the limitation statement and the line; in some cases the pen stroke makes a sharp angle to the right. There seems to be no consistency; the signing of these 210 copies may have been done in several sessions, the author needing a rest or a drink in between.

The numbers have been placed in the same spot in every copy, that is, between the text 'No of copy' and the small horizontal line. These numbers were not written by Wilde, but (most likely) by an employee at the premises of The Bodley Head. The writing of the numerals is consistent in style and in placement.

But what about the position of both - number and signature - in relation to the horizontal lines (the smaller one and the lower one)?

My theory is, that Ricketts had intended these lines not only to balance the whole design, but also to leave space for the number and signature. Examples of printed limitation statements show that dotted lines were normally used to indicate the place where the copy number and the author's signature should be written. In Ricketts's case, there were no printed lines, and he didn't draw dotted lines, he drew uninterrupted lines. His design was intended to have the copy number in a small script on the small line at the end of the limitation statement. However, the writer of these numbers ignored this intention (Ricketts was not present to instruct him), and the number ended up between the text and the line. That space should have been left blank.

And Oscar Wilde? His signature was never as small and precisely calligraphed as Ricketts's own modest and carefully written signature. Wilde came and confiscated the page, it was to be his book, and it certainly was his signature that would make the book worthwhile to buy. And in other cases, he had done the same. When Ricketts received his personal copy of another book that he had designed for Wilde, The Sphinx, he was infuriated, as T.S. Moore recorded:

Yet I can see his face crimson as he tore out the fly-leaf Wilde had inscribed from the copy of The Sphinx sent to him. 'Vulgar beast!' he cried, for the signature ended in a straight-lined 'z' scrawled right across the leaf, an outrage to the exquisite niceties of the artist's book building, in blatant contrast also with the modesty of his insect-like autograph.

And so it is with each and every copy of the 1892 edition of Wilde's Poems...
Posted by Paul van Capelleveen at 12:30 AM

One of the audacious and elaborate early book designs by Charles Ricketts was requested for a reissue of Oscar Wilde's Poems in May 1892.

The unsold (and unbound) sheets were leftovers of the 1882 edition. Bogue, Wilde's early publisher, sold around one thousand copies of the book before his bankruptcy. Sheets of the unsold copies were said to have been transferred to Chatto and Windus, and, later, to Osgood McIlvaine, before they were sold on to Matthews and Lane. This modernist firm acquired 230 sets of sheets, and as 10 were spoilt during binding, the new edition comprised 220 copies. These copies were signed by Oscar Wilde on the page with the limitation statement.

Ricketts had designed that page, the title page, the endpapers, and the binding. It is unclear who designed the half-title that was part of the new gathering that was added to the old sheets.


The limitation statement has been reproduced after the written and drawn design by Ricketts. It starts with a motif that we have seen before in his work, a triangle of small flower decorations. There are eight rows of these, one line containing four flowers, followed by three lines having three flowers and two lines showing two ornaments, ending with two lines of only one flower.

A similar triangle of decorations can be found in the second issue of The Dial (1892). The last page in this magazine contained small bird decorations in four lines: three birds, two birds, one bird and another one in the last row. The decorative triangle was not placed on a blank page. To the upper right side of it, the name and location of the printer were mentioned, and under the triangle, somewhat to the right, the year of publication.


In 1891, Ricketts had drawn a triangle of pomegranates for Oscar Wilde's A House of Pomegranates. This triangle - three lines with three, two and one element respectively - was facing the title page. Here, the ornamental triangle was positioned underneath the dedication by Wilde to his wife Constance Mary Wilde. Three words underlined with three pomegranates. The ornament also appeared between the text lines in the book, and fulfilled different functions in the book.

Another example can be found on the cover of The Picture of Dorian Gray, issued by Ward, Lock & Co. in 1891. The name of Dorian Gray is placed on top of a triangle of four, three, two, and finally, one depiction of a flower.


In Poems, published later than these other books, the triangle points to the text of the limitation statement that starts next to the two rows of flowers at the bottom of it.

S is for Samson.

Samson, the strongest of the children of men,
I sing; how he was foiled by woman's arts,
By a false wife brought to the gates of death.

For the two Vale Press books with poems by William Blake, Charles Ricketts designed some wonderful initial letters. Three of those appeared in The Book of Thel (1897) - initials H, P and T - and four initials were especially designed for the Poetical Sketches (1899): O, P, S and T. They testify of Ricketts's admiration for Blake's works.


The initials 'O' and 'P' were drawn for the opening pages. The other two illustrate one poem each. The 'S' is a woodcut that runs over 19 lines of text, measuring 89x43 mm. It is one of the larger initials that Ricketts designed. Three or four leaves form the curves of the letter S. The figure is not that of Samson, nor of the woman that brings him 'to the gates of death' (as Blake writes). It is the white-robed Angel:

O, white-robed Angel, guide my timorous hand to write as on a lofty rock with iron pens the words of truth, that all who pass may read.

The poetical sketches were presented in prose, however, the Vale Press edition has arranged them as poems.

The Angel is accompanied by the figure of a dove holding a palm-branch.