When the remaining sheets of Oscar Wilde's Poems, published in 1881-1882 (sheets of the second printing, used for the fourth and fifth 'editions') by David Bogue, were used for the new 'edition' by Elkin Mathews and John Lane | At The Sign of The Bodley Head in 1892, quire Q with the list of Bogue's publications was cut out. Also, the first two preliminary leaves were discarded. The original pages contained (1) a half-tile, (2) a blank page, (3) title-page, (4) name and address of the printer. One leaf (4 pages). 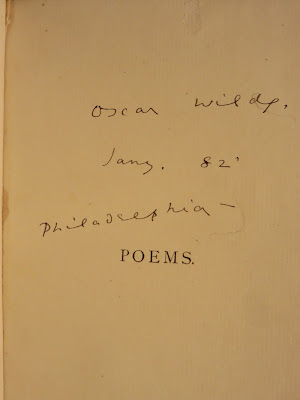 Charles Ricketts was asked to design the new preliminary pages, new endpapers and a new binding. For the first four pages, he designed a title-page and a facing limitation statement. The verso of the title page is blank. The recto of the first page contains the half-title. Or, in other words: (1) half-title, (2) limitation page, (3) title-page, (4) blank. One folded leaf, pasted in at the front.

The thing is, the half-title in the 1892 edition is almost identical to the one in the first edition of Poems, and the type used seems almost the same, including the dot after Poems.

Apart from this typographical similarity, it is to be noted that this is the only page for which any typesetting had to be done. The other pages are reproduced after drawings by Ricketts. The lettering of those pages is not type-set, but originally drawn by hand, and slightly reduced in size for the block, as was the custom with illustrations. Even the place name, outside the double border, has been hand-lettered. The two 'n's and 'o's in London are not identical (as can be seen with a magnifier).

Using a magnifier for the word 'Poems.' on the half-title, we see a very regular type.


Advertisements for the book mentioned that the book had been printed at the Chiswick Press, 'with decorated title-page and end-papers, the binding "The Seven Trees," in gold on Iris cloth; designed by C.S. Ricketts'. The half-title isn't mentioned by the publisher in his letters to Wilde. However, Mason simply assumed that Ricketts designed the four new pages.

My inclination is to believe otherwise.

Firstly, had Ricketts designed the half-title, a more interesting page would have been designed for which another block would have had to be made. The artist knew that the publisher wished to produce a limited edition book without spending too much. Rickets usually was very economical and resourceful when it came to meet the needs of publishers.

Secondly, the new half-title is not hand-drawn but typeset, and thus different in approach in comparison with the other preliminary pages.

Thirdly, the new half-title so much resembles the older one, that it can be assumed that the printer was commissioned to imitate the 1881-1882 half-title, and duly did so. The printer of this new sheet is not identified. However, a half-title was a matter of custom, and it may have been a printer's initiative to include it. Moreover, this was the cheapest solution. Printers and binders needed half-titles to accommodate the workflow.

For the publisher, the half-title wasn't an important page. Why bother an artist like Ricketts for a special design for such a plain page that wasn't seen as the real entrance to the book?
Posted by Paul van Capelleveen at 12:30 AM