In a dim corner of my room for longer than my fancy thinks
A beautiful and silent sphinx has watched me through the shifting gloom.


Oscar Wilde's poem The Sphinx was decorated by Charles Ricketts with drawings and initials; he also designed the binding. (See here for some earlier blogs about this book).

Most initials are weird art nouveau designs, all were printed in green, but the first one was more in line with the letters that Ricketts would draw for his Vale Press books. Although The Sphinx was not published by the Vale Press, but by Elkin Mathews and John Lane at the Sign of the Bodley Head (the deluxe edition also mentioned the American publisher Copeland & Day), the book was printed on Vale Press paper bearing the watermark of Unbleached Arnold and the VP pressmark.

The initial was used one more time, more than a year after the publication of The Sphinx in June 1894. This time, printed in black, it opened a story by Walter Delaplaine Scull (1863-1915) in the fourth number of The Dial that was ready for publication in December 1895. Scull was an acquaintance of F. Seymour Haden, who was the brother-in-law of James McNeill Whistler. He was a non-practicing barrister, who used his inheritance to live independently, as a writer and an artist. In 1896 he published The Garden of the Matchboxes and Other Stories, and then moved from London to Crowborough in East Sussex. He also used the pen name Lewis Lusk. 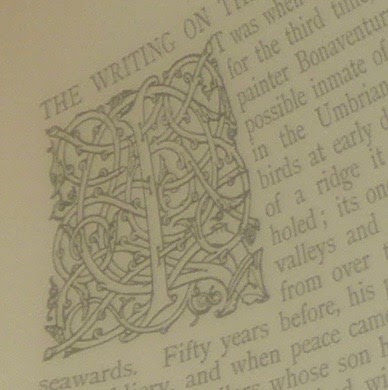 (In her bibliography, Maureen Watry stated that the initial 'I' appeared for the first time in The Dial, probably because she excluded The Sphinx from her research.)
Posted by Paul van Capelleveen at 12:30 AM

308. An Invitation for a Preview Party

On 8 October 1979, Lord Clark of Saltwood opened the exhibition 'All for Art: the Ricketts and Shannon Collection' at the Fitzwilliam Museum in Cambridge. An invitation was issued by the Committee of the Friends of the museum who organised a Preview Party. Tickets were available at £1,50. 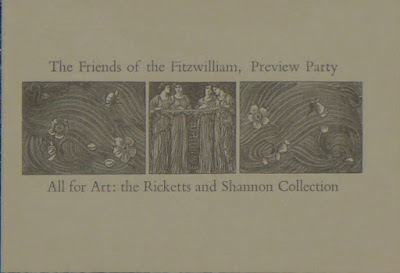 The invitation was hand set and printed by Patricia Jaffé (born Milne-Henderson), the wife of the director of the museum, Michael Jaffé. She was an art historian like him, a wood engraver, and a writer about wood engraving. Her publications include Women Engravers and The Drawings of George Romney. She collected books on coins and antiquities, a collection that was sold in 2016 (her collector's story can be read on the Sotheby's website). During Jaffé's time at the Fitzwilliam, the family lived in Grove Lodge above the Museum offices. Patricia set up a printing press in the museum. This is what she wrote about the press (November 2003) (see: Fitzwilliam Museum News, Number 22, Winter 2003/2004).

When, in 1973, Michael came to the Fitzwilliam as Director, he allowed me to bring a printing press, an 1873 miniature Albion. To this the Friends of the Fitzwilliam added, in the summer of 1975, a Crown Folio Arab treadle platten once belonging to the Printing House of Stanbrook Abbey in Worcestershire whose nuns had produced so much for Sydney Cockerell, the most celebrated former Director of the Museum. With these presses I produced posters, fliers and announcements – things for which the Museum had no funds. I struggled. The task was almost impossible, and everything looked sadly amateur or even crude.

I found a copy of the 1979 invitation in a copy of the exhibition catalogue. Of course, I already have two copies of that catalogue (one a hard cover, the other a paperback), but now I realised that I had always owned the international edition of the bound edition, because this copy is slightly different. The dust wrapper mentions the price in pounds, while the international edition doesn't mention a price. That edition was destined for the overseas market; the Cambridge University Press had offices in New York and Melbourne as well as in London at the time (as the title page mentions).

His clothes were black, & also bare;
As one forlorn was he;
Upon his head always he ware
A wreath of willow tree.

The small initial 'H' (4x4 mm) decorates the sixth verse of the ballad of Harpalus that was first published in the sixteenth century, and occurred in Reliques of Ancient English Poetry collected by Thomas Percy in 1885.


This version of the ballad was published in the January 1891 issue of Atalanta, a magazine for young women and girls. Ricketts was asked to illustrate the ballad. The text in Atalanta was fragmentary: only six verses with two drawings appeared in this issue, the February issue contained two more drawings and another six verses. However, the original ballad went on for 26 verses; more than half of which were lacking in the Atalanta version, based, most probably, on a decision by the editor, L.T. Meade.


Apart from the four larger drawings (two of which were full-page illustrations), Ricketts also produced a handwritten text of the ballad, including a long title: 'Of the Doleful Death, and Dirge, of Harpalus, and of Phillida's Love Bestowed on Corin, Who Loved Her Not'. The calligraphy is very close to what Ricketts would demonstrate, later that year, on the title page of Oscar Wilde's The Picture of Dorian Gray, including the decorations of flowers. There is no other printed text on the pages. The whole contribution is in Ricketts's hand, except for one added typographical intrusion on the second page of the first part: '(To be continued.)' The phrase is set in the same type as normally used for the many serial stories in the magazine.

The second part doesn't have small initials, the first part has two of them. The 'H' for the sixth verse is adorned with six small flowers, the initial 'B' for the second one mimics a more traditional rectangular decorated initial.

The drawings were reproduced (as process drawings) by the Art Reproduction Company, and signed with their mark 'AR Co'.

Ricketts's own monogram or name doesn't occur in or beneath the drawings, but his name is mentioned on the contents page, a page that in most copies will have disappeared, as it sits among the advertisement pages at the front of the issue.

A relatively rare survival of an original issue shows that the magazine aimed at a readership of girls and women between 15 and 25.

The magazine also collected endowments for an 'Atalanta Cot' at the Royal Alexandra Hospital in Rhyl, and supported other good causes. Prize competitions kept the relation with the readers alive. A Shakespeare doll competition was won by the 20 year old Beatrix M. Dunning for 'an elaborate and picturesque Henry Chichele, Archbishop of Canterbury ("Henry V.")'. There were other competitions for essays, pictures and music.

G is for Give.

Give me Chloe to my wife, for I can play finely on a Pipe, I can cut the Vines and I can plant them.


Daphnis is the speaker of these words, after he has found money, and he can afford to marry his love Chloe. Of course, the story being a love story, this doesn't happen right away as new complications arise.

The initial G occurs for the first time in this edition of the book that was adorned with 101 initials and 37 wood-engravings (6 of those forming 3 sets of 2) and a publisher's device. There are only 12 out of 107 pages without decorations (including only one spread of two pages!). There are three pages with a maximum of 3 initials (page 55, 62, 74).

Ricketts and Shannon who collaborated on this book did not feel the need to avoid repetition of certain initials, and the same initial T for instance may occur on two opposite pages, or even on the same page. Meanwhile, the unity of design was challenged, and monotony prevented, by the combination of several alphabets of initials. The stock of those initials was growing. Some were used for The Dial, others would be used again in later publications of the Vale Press.

The initial G only appears on page 71 of this book, and would not be used again until 1903 when The Kingis Quair was published by the Vale Press. The production of these initials was quite time-consuming. They had to be drawn in black ink, adding corrections in white and black again before they could be photographed and reproduced on a woodblock that would then be engraved by Ricketts. After that they were electrotyped, before they could be used in a book. One initial could take as much as a day.

The initial G was one of an incomplete series of initials, this one displaying the fruit of the pomegranate. There are similar initials, showing the same type of winding branches that are tied together, but without the pomegranate.
Posted by Paul van Capelleveen at 12:30 AM