For many of Ricketts's friends, his death came as a surprise, although they found him tired and overworked in recent years. The poet Gordon Bottomley, for example, felt that Ricketts, after Shannon's accident, showed even more grandeur than before. He wrote to Thomas Sturge Moore:


I used to revere him and think I knew what he was: but it was not until after Shannon’s calamity that I realised all his grandeur as well as greatness. Every time I was with him after that he opened out more and more: and I used to come away with a new awe mingling with my ancient admiration. There was one night when he kept Emily and me sitting late, and then walked with us to the ’bus, that we never forget: his loneliness, his solicitude for Shannon, the dignity and beauty of all he said made us often feel like tears if he had not been on a plane beyond them.
[Unpublished letter from Gordon Bottomley to Thomas Sturge Moore, 1 November 1931]


During his last year Ricketts had made a summer trip to Italy, but he was bored and felt depressed and tired. Shannon, who, after his fall, had never become himself again, 'developed a "phobia" against his studio and against Ricketts' (as Paul Delaney informs us in his biography of Ricketts). Ricketts threw himself into his work and designed dresses and scenery for Ferdinand Bruckner's play Elizabeth of England, but he couldn't handle it all, and asked Henning Nyberg to complete his work, while Bruce Winston saw after the costumes.

His doctor treated him for indigestion, and it was said to be nothing serious. In the early  morning of 7 October 1931, his man-servant Percy Nicholls brought Ricketts his medicine. When Nicholls  returned a few hours later, Ricketts had died in his sleep of heart failure. Delaney adds: 'Indeed, one might say he had died of a broken heart.'

What then follows are stories about the cremation, the memorial service and the scattering of the ashes. But in the meantime some events had occurred and they were due to the doctor's misdiagnosis.

Here is what Thomas Sturge Moore wrote to Gordon Bottomley on 21 December 1931:

The doctor diagnosed Ricketts['] case quite wrong and gave him exactly the worst treatment, and then refused to sign the death certificate so that the police took his poor body away for a couple of days for Dr Spillsbury to examine. As Jackson says if any man ever died of a broken heart it was Ricketts. [...] But I expect Nyberg has written all the details to you. And I suppose they ought to be forgotten.
[Unpublished letter from T. Sturge Moore to Gordon Bottomley, 21 December 1931]

Indeed, Nyberg had written Bottomley, but he hadn't touched on these sinister details.

Bernard Spilsbury (1877-1947) - Moore added a letter 'l' to the name - was a famous pathologist who performed thousands of autopsies following sudden deaths, including murder victims, but he also examined the bodies of executed criminals. Ricketts's sudden death needed to be examined.

These fragments are published as a prepublication of the forthcoming online edition of the complete correspondence of Thomas Sturge Moore and Gordon Bottomley, which is being prepared by John Aplin for InteLex Past Masters.
I am very grateful to John Aplin for agreeing to this pre-publication.
Posted by Paul van Capelleveen at 12:30 AM

In this blog, I haven't mentioned the new biography about Oscar Wilde before, but the book is a good opportunity to see how both biographers - Richard Ellmann and Matthew Sturgis - deal with Charles Ricketts.


The lemma Ricketts is the most elaborate in the index of Ellmann's biography Oscar Wilde (published 1987). There are twenty references. In most cases they do not refer to Wilde's meetings with Ricketts, but to stories that Wilde told and that Ricketts published in his Recollections of Oscar Wilde (1932). This applies to almost half of the references. In one case Ellmann refers to the letters and diaries published in Self-Portrait (1939).

Ricketts is only mentioned in passing as the designer of Wilde's books. Much more attention is paid to the coterie of the Vale and The Dial in connection with John Gray, one of Wilde's lovers, to copies of Wilde's books that Ricketts received, and to the possibility that he was a model for Basil Hallward in The Portrait of Dorian Gray. The role of designer of Wilde's books is almost neglected. Ricketts's role in Wilde's life was mainly limited to the years 1890-1895, and from 1905 onwards with his designs for the posthumous Wilde publications.

There are no portraits of Ricketts or reproductions of Wilde's books in Ellmann's biography.


Wilde's fame has not diminished since 1987, on the contrary; in 2018, the new biographer Matthew Sturgis no longer even mentions Wilde's surname in the title of his biography: Oscar. A Life. We don't recognise any Oscar - except Wilde.

Only fourteen references to Ricketts are included in Sturgis' index. Sturgis approaches Ricketts in a different way: not as a source for stories about Wilde, but as a designer and friend of Wilde throughout the book. In only two cases does he quote Ricketts's Recollections as a source for stories about Wilde and others. Most of the passages are about Ricketts's designs for The Picture of Dorian Gray, The Sphinx, and other books. Evidently, he had Delaney's biography of Ricketts at his disposal (which had not yet appeared when Ellmann wrote his biography), but he also cites earlier works such as the memoirs of William Rothenstein and Charles J. Holmes, and he quotes from Wilde's letters. From this he found a nice phrase about Ricketts's advice to join him in a Trappist monastery after prison (imagine them together in  monastery cell), and another letter in which Wilde expects Ricketts and Shannon to visit him at the end of his life: 'those good kind friends of mine'.

This is how Sturgis treats both artists, Ricketts and Shannon: as good friends of Wilde and as his most important designers. In this way he does more justice to their unique relationship with the author than Ellmann did.

Sturgis' biography does not contain images of Ricketts's designs either, but there is a double portrait of Ricketts and Shannon: a well-known lithograph by William Rothenstein.

And then, there are the endpapers: they have been decorated with a design after Ricketts. Now this is truly to be regretted. The design is not justified and was created by maltreating Ricketts's original design for the binding of Wilde's Poems.

This in itself was a misjudgement, and the art editor did not realize that Ricketts had also designed the endpapers for the 1892 edition of Poems - with a different design - that should have been chosen instead,  and then, of course, in the perfect design of Ricketts himself, and not in a bad arrangement.

The red colour is passable. But the subtlety of the original has disappeared. We can't blame the author for this, but we can blame his publisher. Shame!
Posted by Paul van Capelleveen at 12:30 AM

Occasionally, in search of literature on illustrations and book covers, you'll come across an article that surprises you. Recently I read some chapters in Gerard Curtis's Visual Words. Art and Material Book in Victorian England. The book dates from 2002 and contains a chapter on the visual impact of books, as the author states: 'from their relationship with busts in libraries to their use as symbolic and iconic manifestations of sexuality and death, and as objects sublimating morality and mortality'. This chapter is called 'The empty biscuit tin'.

Charles Ricketts is mentioned in this chapter (not in the index):

Curtis assertions are made in a paragraph called 'The breast-bound book', which, by the way, is Marcel Duchamp's cover for Le Surréalisme en 1947. This is an indication of the ease with which Curtis jumps back and forth through time, from an example from 1863 in which books by female and male authors are not allowed to stand next to each other on the bookshelf, to a period in which sexuality was commented on and shown in a different way. His assumptions are not always based on facts. In this context Ricketts is mentioned.

Given the high percentage of publishing costs spent on binding alone, the widespread attention to bindings and their designs by publishers show how there was an economic return on catering to both the commodity and fetishistic reliquary value of text. Indeed a considerable  number of covers from the period featured comely women, making the textual attraction quite specific.

Curtis mentions Louis Legrand's binding for Erastène's Cours de Danse Fin de Siècle (1894) with the 'grasped spread-leg of a Cancan dance', and Aubrey Beardsley's illustration for a prospectus advertising The Yellow Book, displaying 'a sensual woman, clad in black, and out alone at night, preparing to pick out a volume at a bookstall'. In between, he mentions Ricketts:

The small exhibition at the Rotunda of the Old Library at Dulwich College in London (see blog 425) ends on 17 October. Requests to visit should be addressed to the Director of Art and Design Technology, Sue Mulholland. (See here for her email address). A catalogue is available at the same email address.

The curator (Jan Piggott) kindly mailed me some images made by his wife, Cas Piggott. They show the five display cases with books and prints from his collection, and on the wall are reproductions and texts. Originally, the exhibition was supposed to be more extensive and obviously the selected works hardly fit in the showcases. The books are lying on top of each other. Only a private collector can do that. A museum or library would not give permission for this nowadays because of the strict climate and display requirements. This presentation is prove of the collector's insatiable appetite and admiration for the work of Thomas Sturge Moore.


The work of Thomas Sturge Moore is shown between that of his contemporaries Charles Ricketts and Lucien Pissarro. There are some remarkable exhibits, such as the original woodblock for the engraving 'The Centaur's First Love', that is always associated with the Vale Press edition of Maurice de Guérin's The Centaur, and The Bacchante. (1899), translated and illustrated by Sturge Moore. This wood-engraving was not used for the book.


The block was among some seventy blocks given to the St Bride Printing Library by Leonie Sturge Moore. This block has been kept in an envelope, and is accompanied by a print. It is shown with the artist's tools. 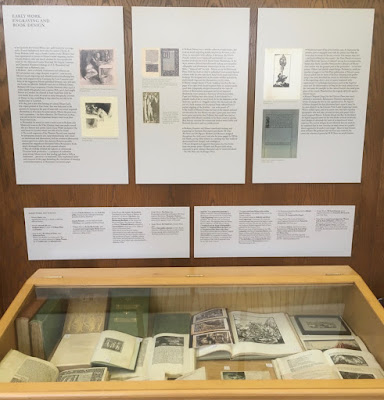 Moore engraved some ninety blocks; the images did not reach a very large audience. His bookbinding designs did reach a wider public, especially the ones he designed for a large number of William Butler Yeats' later books of poetry and prose, such as Reveries over Childhood and Youth and The Cutting of an Agate. These elegant and symbolic designs were seen by most contemporary readers of Yeats' work.

The opening, I heard, was a special event, attended by four Sturge Moores, two Binyons, and a Pissarro.
Posted by Paul van Capelleveen at 12:30 AM

427. A Dedication Copy of Dorian Gray

Next Monday, on 7 October, a deluxe copy of Oscar Wilde's The Picture of Dorian Gray will be auctioned at Christie's in Paris.

This is a special copy, No. 74 of 250 signed large paper copies, containing an inscription by Wilde to the French author Pierre Louÿs:

Given to
Pierre Louÿs
by his
friend
Oscar Wilde

in London:
in June: