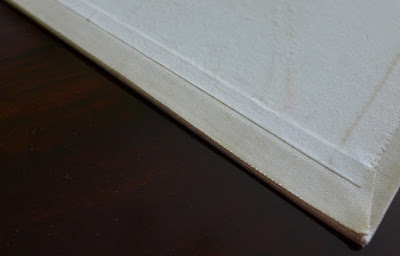 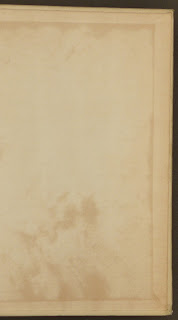 The last of the vine borders designed by Charles Ricketts for the Vale Press was only partially new. Published in the last book of the press, the 1904 bibliography of the Vale Press, the border consists of two parts on facing pages. 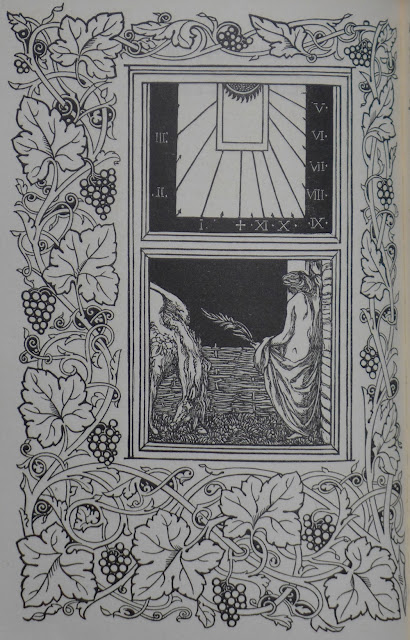 The border on the right hand page, enclosing the beginning of the text, had been used before, in the 1902 edition of Omar Khayyam's Rubaiyat (1901).


For the left hand page a new border had to be designed, because the original one for the Rubaiyat enclosed a large wood-engraving and a title shield, measuring 170x108 mm. The wood-engraving for the bibliography, illustrating the sign-board painted by Shannon for the Vale Press shop, is much smaller: 123x71 mm. It could of course have been larger, but apparently Ricketts did not want this. The proportions were different and the sign-board would not have fitted the available space. Comparing the two wood-engravings, the length was 1,3 to 1 while the width was 1 to 1,5. In the bibliography Ricketts could have added some sort of small title shield as well but he decided not to do this.

The left hand border in the bibliography is not simply a mirror image of the re-used border, and it is designed to look as an harmonious part of one large border that stretches over two pages. It shows, that, although Ricketts had decided to close down the Vale Press, he didn't refrain from new designs and from improving older ones.
Posted by Paul van Capelleveen at 12:30 AM

The series of vine borders that Charles Ricketts designed for his Vale Press books is longer than I thought it would be a few weeks ago.

The largest vine border was done for one of a series of folio editions of the Vale Press, comprising Sir Thomas Browne's Religio Medici, Urn Burial, Christian Morals, and Other Essays, edited by C.J. Holmes, and published in 1902.

It is similar in style and detail to that for the Omar Khayyam edition, but it is much larger, as the Browne volume is c. 30 x 20 cm. The border is signed 'CR' in the lower left hand corner, and encloses the first text page (after the introduction). It was not engraved by Ricketts but by Charles Edward Keates.

The border has not been used again.
Posted by Paul van Capelleveen at 12:30 AM

After a fire in December 1899 at Ballantyne printer's had destroyed a large part of Charles Ricketts's decorations for the complete edition of Shakespeare's plays he was about to publish (including the two finished volumes) Hamlet and Othello), the new Vale Press books would be more sparsely decorated. For the Shakespeare volumes he had to come up with novel illustrations - the edition had been sold out by subscription and they had to be delivered, so Ricketts quickly designed small and light wood engraved decorations.

Volume after volume was issued, monthly, by the Vale Press, amounting to 39 volumes in total. Some of Ricketts's decorations are corner pieces, others embrace the text on two sides, while a few enclose the text on three sides, but none of them are heavy. They are not distracting the reader from Shakespeare's text. The borders illustrate honeysuckles, acorns, or show other floral details, and they are used many times over, although in each volume only four or five or so make an appearance.

The borders usually decorate the beginning of a new act; they are quite functional, and herald a pause in the play. Some, however, are not used as markings, and seem to be inserted  arbitrarily to lighten up a page of the plays. The two poetry volumes, Sonnets (1903) and Poems (1903), do not contain decorations. The same goes for the identically issued play by Christopher Marlowe, Doctor Faustus (1903).

In the sixth volume, on page xi of The Tragedy of Julius Caesar, a border of the older type was printed, an intricate border of oak leaves, signed 'CR' in the bottom left corner. The steel engravings have not been signed; this is an exceptional decoration, as if it had been found among the debris of the fire. It might indeed have been one of the original wood engravings Ricketts had designed for the Vale Press edition.


This border was repeated in The Tragedy of Macbeth (1901), page xlv, and again in The Second Part of Henry IV (1902), to mark the beginning of Act I.

This border re-appeared in A Midsummer-Night's Dream (1901), page xxviii. Act III begins on the opposite page. It is also used to decorate the beginning of Act II on page xviii of Much Ado About Nothing (1902), and for the beginning of Act V of As You Like It (1902), page lxxvi.

In 1902, this older type of border - reminiscent of the opening pages of the earliest Vale Press volumes - was used for the last time in The First Part of King Henry IV (1902), page lxviii.


Stylistically, there is quite a difference between these two full borders with the lighter ones, and one wonders if they all form one ensemble. I think that these two may have been remnants from the past, but there is no way to ascertain this.
Posted by Paul van Capelleveen at 12:30 AM

Most vine borders designed by Charles Ricketts for his Vale Press books were made for one page only, but there is one exception. The border for the edition of the Rubaiyat of Omar Khayyam that was published in 1901. The opening pages consisted of a combination of a title page and the first text page.

The review of the book by The New York Times, 12 October 1901, included a description of these opening pages:

'The volume contains a striking frontispiece and border designed and engraved by Mr. Ricketts, which is worthy of being counted among the latter’s most successful work. The border, the same in design for both the frontispiece and opening page, is unusually fine. It shows interlaced vine leaves and bunches of grapes, so printed as to be unusually light and graceful in row, but wide and bold on the opening page. The latter also contains an unusually effective initial letter. The frontispiece shows finely designed lettering on a lower panel: the upper portion, about two-thirds of the entire page, containing a finely designed and engraved vignette, in which  the spirit of the text is appropriately shown.'

Interestingly, Ricketts designed the two pages as one whole without imposing a strict symmetry to it. The left page has a small vine border on all sides, to the left, right, top and bottom, which is quite unusual for his borders that usually echo the proportions of the margins as proposed by William Morris in his ideas about The Ideal Book. The page on the right perfectly mirrors these margins, that grow larger, clockwise from the left to the top to the right to the bottom of the page.

The left page includes an illustration that throws the theme of vines into the face of the reader, with a title field below for the title. The page on the right shows Ricketts's monograph at bottom left: 'CR'.

The drawing shown last week showed grapes at the centre of the drawing. Ricketts managed to place them to the right and to the left, even in the small spaces, such as the borders to the left and right of the frontispiece of the Rubaiyat, in order to secure a pattern that evenly distributes lighter and darker parts. His bunches of grapes on the left page contain up to eight individual grapes, while those on the right page contain far more than that, ten to thirteen or more grapes. The leaves surrounding the grapes are smaller as well, of course. Still, on opening the book, the whole makes for a harmonious feeling.

In 2016 this blog will celebrate the 150th anniversary of Charles Ricketts's birth on 2 October 1866.
Contributions are most welcome.
Posted by Paul van Capelleveen at 12:30 AM