The C is for Conquered.
Conquered the flower-maidens, and the wide embrace
Of their round, proffered arms, that tempt the virgin boy;

The first book of poetry of John Gray, Silverpoints, appeared in 1893, and although not all idiosyncrasies of its design can be attributed to Charles Ricketts, whose leads were not always followed by the printer, overall, the book displays a novel harmony of 1890s book design. The book contained many poems that were dedicated to friends in England and abroad: Felix Fénéon, Robert Harborough Sherard, Oscar Wilde, Pierre Louÿs. The book also contained some translations after Stéphane Mallarmé, Arthur Rimbaud, Paul Verlaine, and Charles Baudelaire. Each section of these translations starts with a decorated initial, designed by Ricketts; the first one illustrates 'Parsifal imitated from the French of Paul Verlaine'.

The book's concept followed an early Renaissance example that Ricketts saw exhibited in the British Museum, where, according to him, it was on show for eight years. The edition of the texts of Virgil, edited by A.P. Manutius, was printed on vellum in Venice by Aldus Manutius, 'Ex ædibus Aldi Romani', in 1501. Ricketts remembered that this copy came from the library of Isabella D'Este, Duchess of Mantua. The current description (British Library C.19.f.7) does not mention her name:

The first book printed in the Italic types invented by Francesco da Bologna, who is mentioned as the inventor in three Latin lines on the verso of the title. With illuminated initials, and an illuminated border to the first page of text. This copy belonged to the Gonzaga family, and has on the fly leaves the autographs of Cardinal Ercole Gonzaga, and Vincenzo Gonzaga, Duke of Mantua.

It was a famous edition that, as a recent catalogue on Manutius argued, 'introduced the series of enchiridia, books in the small octavo format which could easily be carried about and held in the hand and with their texts in the new italic type cut by Francesco Griffo, who, with his “Daedalus-like hands”, is thanked by Aldus in some short prefatory verses entitled In grammatoglyptae laudem. The choice of Virgil as the pre-eminent Latin poet to open the series was deliberate and symbolic, as was Aldus’ choice to present the text by itself, without commentary or textual apparatus: this kind of edition was aimed at a wider public than trained scholars, as Aldus explicitly states, consisting of all those who “optime scire Latinam linguam desiderant”.' (Entry written by Stephen Parkin)

This vellum copy, as Stephen Parkin, has it, came from the Gonzaga library in Mantua, and had been presented, presumably, to Isabella d’Este Gonzaga 'in the summer of 1501 – just three months after publication'.

It is easy to recognize some elements from the book's layout in Ricketts's Silverpoints: the small, elongated format, the verse lines in italics, the initial letter of each line in roman, a large decorative initial at the top.

But there is more. The remarkable painted border in the 1501 edition of Virgil has an outer lining with small golden dashes pointing outwards. This pattern was copied by Ricketts for the cover of Silverpoints, and can be found at the top and bottom of his now famous design of wavy lines.

290. The Grave of Rickett's Mother: an Update

The Italian local historian Marco Cazzulo has written a blog about his find of the grave of Charles Ricketts's mother in Genua.

Both authors of the book about Ricketts's mother have left a message on the blog: Paul Delaney and Corine Verney.
Posted by Paul van Capelleveen at 12:30 AM

The B is for Both.

Both city and suburbs rejoiced.


The second number of The Dial appeared in February 1892, and, unlike the first issue of 1889, it didn't contain large illustrated initials, but smaller and more simple decorated initials.

The initial 'B' decorated the first sentence of a story by Charles Ricketts, 'The Marred Face', about a Chinese queen, and the head of her former lover, Chang Tei. His house is burnt down, and after his torture and decapitation, his head is taken by a beggar, who tosses it in the lap of the queen. She holds on to it for years, until her palace is rioted, and burned to the ground as well.

To the left of the page was an illustration of the queen holding the scull in front of a mirror.

This initial is part of an incomplete alphabet, comprising only of 'B', 'C' and 'G', all decorated with doves and winding lines. 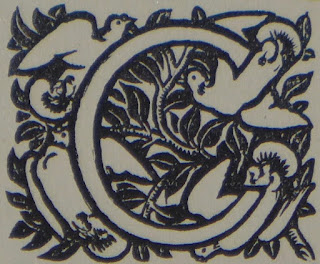 The poems in The Dial nor the art notes were decorated with such initials. These were reserved for the prose contributions. There are slight differences in decoration though, the 'C' was adorned with doves and branches, while the 'G' had berries as well. The piece on 'Maurice de Guérin', the French author, and 'King Comfort', a story, were both written by T. Sturge Moore. Apart from the initials, they were decorated with headpieces.

There was a fourth initial in this issue of The Dial, decorating a defense of the first number of the magazine against its critics, written by Ricketts. This initial 'T' was decorated with fishes and waves.

These initials were not used again, excepting the 'T' that reappeared in an invitation for a private view of the Society of Medalists in the Dutch Gallery six years later.
Posted by Paul van Capelleveen at 12:30 AM

On Friday and Saturday, March 17 and 18, 2017, the University of Delaware will host a symposium, Celebrating the Mark Samuels Lasner Collection: Rare Books and Manuscripts, Victorian Literature and Art.

Mark Samuels Lasner has donated his collection of Victorian books to the University of Delaware Library where it has been on loan for quite some years. I visited Mark there in 2013 to see a few of the more than 9.000 books, prints and documents in his collection. See my two blogs about the visit (No. 82: A Visit to Delaware, and No. 83: The Mark Samuels Lasner Collection).

The collection focuses on British literature and art of the period 1850 to 1900, with an emphasis on the Pre-Raphaelites and on the writers and illustrators of the 1890s, and it contains numerous books designed by Ricketts, including signed and association copies, proofs, letters, as well as a great number of lithographs by Charles Shannon.

Mark is one of those all too rare collectors who share their treasures with researchers and with the general public, by allowing full access to the works; an impressive series of exhibitions have been on view, some accompanied by well designed catalogues.

To pick just two items from his vast Ricketts and Shannon holdings is a challenge. My previous blogs contained illustrations of some of the more important items, such as an original drawing for Oscar Wilde's The Sphinx and a dedication copy of the Vale Press edition of The Life of Benvenuto Cellini. But there are many smaller and even ephemeral documents that contain not widely known facts.

One of those is a proof for a Vale Press Notice that was published after a fire destroyed part of the stock and archive at the Ballantyne Press at the end of 1899. This proof contains some corrections that have been carried out in the definitive version, but more importantly, it contains a date stamp of the printers'. Most of the announcements and prospectuses are difficult to date, and when I published my checklist of Vale Press works in 1996, the date of publication was a mild guess: 'Summer 1900'. The proof is dated '28/7/00', 28 July 1900.


Another rarity is an art publication by Hacon & Ricketts: three lithographs by William Rothenstein: Paul Verlaine. Three Drawings (1897). The portfolio was issued in 25 copies, initialled in pencil by the artist, and issued in printed wrappers. The Samuels Lasner copy has been bound in green cloth (similar to the Ricketts and Shannon edition of Daphnis and Chloe). This is No. 6.


Exhibition
Victorian Passions: Stories from the Mark Samuels Lasner Collection, curated by Margaret D. Stetz, Mae and Robert Carter Professor of Women’s Studies and Professor of Humanities, is on view from 14 February to 3 June 2017, at the Special Collections Gallery, Morris Library.

The symposium is free and open to the public, but registration is requested. See the conference website of the University of Delaware.
Posted by Paul van Capelleveen at 12:30 AM