279. Illustrated Editions of The Picture of Dorian Gray


In the novel the portrait of the hero plays an important role, as it changes while the hero himself does not seem to change at all (except of course for his malignant character). It may seem surprising that illustrated editions were not considered during Wilde's lifetime. However, the novel only had three impressions. The first one was in magazine form, and the last one was suppressed, as the Wilde trials went the wrong way. Illustrating a novel by a convicted author could have ruined an artist's reputation.

Giudicelli's study, Portraits de Dorian Gray. Le texte, le livre, l'image (2016), looks promising, although on first perusal I found some disturbing and odd mistakes. For example, on page 18 Wilde's The Sphinx is mentioned in a footnote, and the author seems to think that the book was illustrated by 'Charles Ricketts et Charles Shannon'. Of course, Shannon had nothing to do with it. The author confuses both artists in a paragraph on page 58, writing about A House of Pomegranates:

Obviously, it is the other way around, as every bibliography duly notes.

I haven't been able to read the whole book carefully yet, but these errors and the illustration of A House of Pomegranates disturbed me. A full page colour image of the binding, designed by Charles Ricketts, is on page 59. This copy is in such a worn state that the inclusion of the image does not do credit to the designer nor to the author. There are many better copies around.

Another curious mistake is the illustration on page 30, that is meant to depict the 'couverture de l'édition originale de The Picture of Dorian Gray'.

The illustration shows a full leather binding, with raised bands, gilded and decorated with red dots on the spine (Ricketts's original spine design has been discarded). The front of the binding seems to be some sort of reproduction of Ricketts's original design, but it isn't. It is based on a badly redrawn image. See for example the star after Gray: it should have been a group of seven dots representing a flower. See the circle between Dorian and Gray: in the original there is a circled dot. The binding depicted must be a private binding, a modern one probably, and certainly a rebound copy.

Has the author of this new study on Wilde's The Picture of Dorian Gray ever seen the original edition?


Both images are from a private collection. A better choice of illustrations would have made this a better, and more correct, book.

Note, 1 December 2016:
Michael Seeney was so kind to point out that the author of the book believes that the first illustrated edition dates from 1908, but Stuart Mason, in Art and Morality, lists an earlier one: an illustrated Russian translations from 1906. These illustrations are by Modest Durnov (1868-1928), who has been described as 'a dandy in the English style'.

Last Thursday, the writer A.S. Byatt visited The Hague as part of a Dutch tour. Next December, she will receive the Erasmus Prize in the Royal Palace of Amsterdam, and in the build-up to that ceremony, a number of activities have been organized, including an interview.

A visit to Museum Meermanno, the House of the Book in The Hague, was scheduled for the afternoon of 17 November. After a refreshing lunch in the former kitchen of this mansion turned museum, and an introduction on the history of its collections by Rickey Tax (acting director), Mrs. Byatt - Dame Antonia Susan Duffy - was shown the long book room on the first floor.


The same afternoon a Dutch translation of her new work, Peacock & Vine. Fortuny and Morris in Life and at Work (2016) was to be launched at the British Embassy in The Hague. As a surprise, the museum proudly showed her a complete collection of William Morris's Kelmscott Press in a book case manufactured by Morris's workshop.


Obviously, the writer who had recently studied the life and fabric designs of Morris was pleasantly surprised to see all his books together in a matching case. One of the books was handed to her, John Ruskin's The Nature of Gothic. She has quoted a few phrases from this book in her own Peacock & Vine.


Of course, the edition of Chaucer's tales was also presented to her, along with some smaller books.


After this, Byatt also visited the small exhibition about Charles Ricketts where she was delighted with the drawings and stories.

It was wonderfully rewarding to show the books and exhibits to an author who visibly enjoyed the objects and surroundings, and who thanked us for these 'revelations'. 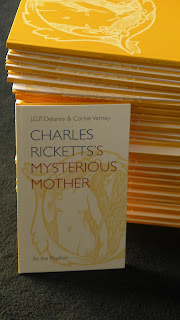 A photo from the archive of The British Museum blog (25 September 2015):


A mummified cat next to some drawings of mice by Charles Shannon and a drawing of cats.
Posted by Paul van Capelleveen at 12:30 AM

In July 2015, I noted that an early painting by Charles Shannon had not been sold at an Irish auction. This was 'A Sea Nymph', an undated painting, apparently signed 'CHS'. The signature of the painter nor the label on the back of the painting, as reproduced by the auctioneers, could be deciphered.


The current owner of this painting has now come to the rescue.


The painting did not sell at auction; it was later acquired from the original owner by the buyer. It is he (who desires to stay anonymous), who just now has sent me some images of the monogram 'CHS' (ascertaining the authorship of Shannon), and of the label on the back. 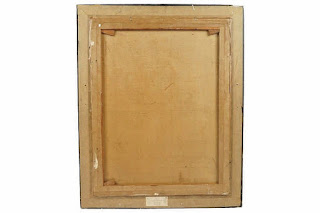 The label is that of the firm of J.J. Patrickson, 120, Fulham Road, South Kensington. According to the current owner, the firm was in business there between 1920 and 1961, and he wonders if the frame is original, 'as the canvas is also unlined'. [See also: British Picture Framemakers, 1600-1950 online.]

The label tells us that the firm had versatile ambitions, as was usual: they did 'restoration & renovation of oil paintings & engravings', they could supply 'old frames, copied, cut down & enlarged', and they had 'mouldings for the framing of photographs, etchings, watercolours, engravings, etc., always in stock'.

The painting might have had an interesting provenance: when was it sold by Shannon? Who acquired it? Who had it framed (and perhaps later reframed)?

[Thanks are due to the current owner, who mailed me the images on 1 November 2016.]
Posted by Paul van Capelleveen at 12:30 AM