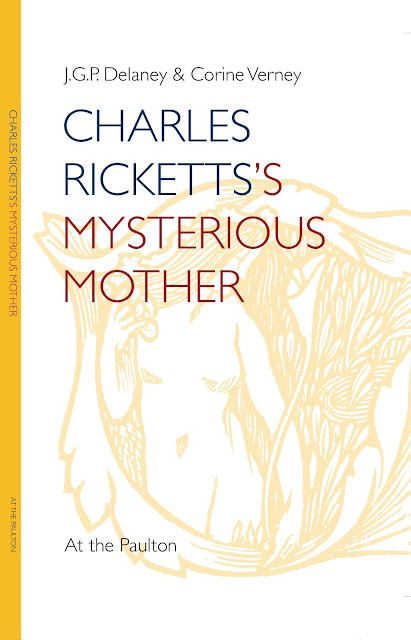 One of Ricketts's favourite characters was Don Juan. Several paintings depicting this figure from the Mozart opera are in existence, one of those being on display at the Scottish National Gallery.

The museum's description is somewhat confused, as it states:

'This painting shows Don Juan, the legendary libertine, as he is about to kill the Commander who was protecting his daughter from Don Juan’s advances. The towering statue references the climax of the story when Don Juan is told he will be punished. He takes the statue’s outstretched hand and finds himself in an unbreakable grip. The statue then drags Don Juan to Hell.'

The painting depicts the scene in the graveyard. Don Juan's servant Leporello reads the name of the Commendatore on the pedestal, after which Don Juan will invite the statue to come to dinner in his house.

The museum owns several other works by Ricketts: three costume designs, a lithograph, and two wood-engravings. Shannon's work is represented by four lithographs.
Posted by Paul van Capelleveen at 12:30 AM

Blog reader Daniel Sheppard alerted me to an unknown painting by Charles Shannon that was offered for sale by Liss Llewellyn Fine Art in London. The portrait of a woman had sold already when he contacted me.


The oil on canvas painting measures 762 x 508 mm, and is framed. Its provenance is given as: 'The Fine Art Society; The Fortunoff collection [HF 28]'.
Posted by Paul van Capelleveen at 12:30 AM

297. An Echo From Willowwood

Last December, the Ohio University Press, published a book of essays about 'Victorian and neo-Victorian graphic texts', Drawing on the Victorians.

Edited by Anna Maria Jones and Rebecca N. Mitchell, Drawing on the Victorians, was labelled 'a pioneering work in illustration studies' and 'a necessary starting point for future work in the field' by Lorraine Janzen Kooistra.

The book contains an essay by Linda K. Hughes, professor of English at Texas University, 'Prefiguring Future Pasts' (pp. 207-236), in which one of Ricketts's drawings is discussed.

Her chapter is about Victorian illustrated poems, which she sees as 'poetic-graphic texts' that show an inseparability of word and image. These 'poetic-graphic texts often appear on a single page and rarely exceed five pages'. Thousands of this type of illustrations were published during the second half of the nineteenth century, and of a significant number of them the subject was domesticity and medievalism.

Ricketts's drawing for Christina Rossetti's poem 'An Echo from Willowwood' is said 'to mark the birth of neo-Victorianism as we know it' (p. 226) and to mark 'a turning point in Victorian neo-medievalism, from a prehistory to the inception of neo-Victorianism' (p. 228).

The term neo-Victorianism is chosen because Rossetti refers to the work of her brother, Dante Gabriel Rossetti, and it is usually seen as a late form of Pre-Raphaelitism.

It is worthwhile quoting Linda K. Hughes' comment in full:

For this hybrid text explicitly quotes and replays in a different register the visual and verbal works of D.G. Rossetti. The text is doubly belated, since its title announces and after-sound or echo, while the poet's last name identifies the surviving sister of Dante Gabriel Rossetti, whose line forms the sonnet's epigraph and a legend on the visual border between Ricketts's two images ("O ye, all ye that walk in willowwood"). In the "Willowwood" sonnets, also first published in a periodical, a bereaved lover sits beside a spring with Love personified; and as Love strums a lute and sweeps the water with his wing, the face of the lost beloved rises to the surface, the lover's lips meeting hers in a long kiss that lasts only so long as Love sings. In the sister's "Echo," the woman is no longer a ghostly phantom rising to the water's surface but an equal sharer of gazing, longing, and loss: "Two gazed into a pool, he gazed and she... | Each eyed the other's aspect, she and he. | Each felt one hungering heart leap up and sink" (lines I, 5-6). Everywhere true to the tone, theme, and formal choices of the "Willowwood"  sonnets, the "Echo[ing]" text also revises the former in making the woman an active agent and participant, a decidedly modern note in 1890.

Ricketts's design also looks back to, yet revises, his precursor's art. The upper half of the diptych is clearly indebted to D.G. Rossetti, as Lorraine Kooistra notes, in its "crowded" visual scene, neo-medieval trappings, and frame that pays homage to D.G. Rossetti's own visual designs for books. The shells on the bereaved man's cape also recall decorative devices on the frames of Rossetti's paintings, while the empty boat perhaps alludes to his Moxon illustration for "The Lady of Shalott," in which Lancelot leans over the dead woman and her boat. In contrast, Ricketts's image in the lower half of the diptych, beautifully attuned to the swirling water that joins the lover's faces in Christina Rossetti's text, shifts to an art nouveau style while also graphically marking (as Kooistra notes) the sonnet's division between octave and sestet. In paying such homage to D.G. Rossetti and his verbal-visual idioms, then sweeping away from them in both text and design, thus marking the temporal distance of this 1890 work from them, the poetic-graphic text "An Echo from Willowwood" establishes the very groundwork of later neo-Victorianism: adapting Victorianism to circulate modernity and difference.'

Although other commentators have dwelled on the two styles of drawing that Ricketts expressed in this illustration (the lower half of which came up for sale in 1996), Hughes stresses the self-conscious imagery that Ricketts displays.
Posted by Paul van Capelleveen at 12:30 AM