Local sellers in England regularly offer works by Ricketts and Shannon at auctions. It takes some effort, from abroad, to keep track of these auctions. Last Saturday Bellmans in Wisborough Green, West Sussex sold a lot with assorted prints.


'The Saturday Sale' (22 February 2020) included lot 113: 'a group of assorted prints' by British and European artists; a mishmash, with artists whose names were not spelled correctly. For example, the real name of 'Amanda Rassemfosse' is Armand Rassenfosse.

The lot contained eight prints, three of which were lithographs by Shannon. The whole was sold for £650.

The last patterned paper Ricketts designed was used for the posthumous edition of Christie's Season 1931 - I treated this book a few blogs ago in 444. A Posthumous Season.

An interesting aspect of decorative papers is that a certain section of a pattern (say 10 by 10 centimetres) may be repeated so often that a large sheet of decorative paper can be made with minimal means. But Ricketts worked differently, as we saw with the paper for the Shaw edition, and the patterned paper for Christie's Season 1931 was designed as one whole. The liveliness of a patterned paper depends to a large extent on that lowest common denominator of the design (for wallpapers - such as those by William Morris - it can be as much as 50 by 50 cm).


However, in Ricketts's patterns, the individual elements are not repeated one-on-one; he must have drawn a sheet the size of the book. We can see this, for example, in the small decorations between the wheels. These seem to be composed of three leaves, but there is for example one where two leaves are very small compared to the third one. This ornament occurs only once. 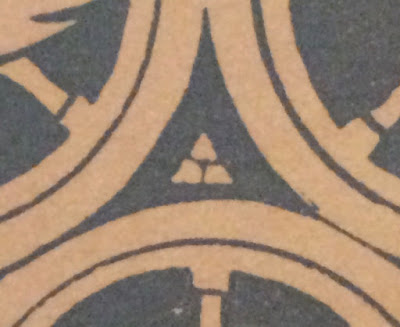 If we compare two copies of the book, we see that this one - strongly divergent - ornament is in exactly the same place. This too is an indication of the size of the original drawing. The area of the paper on the binding measures 25.5 by 16.2 cm.


The tips of the wings all curl in a different way. Most wings have two incisions on the right side, but some are missing that second notch. 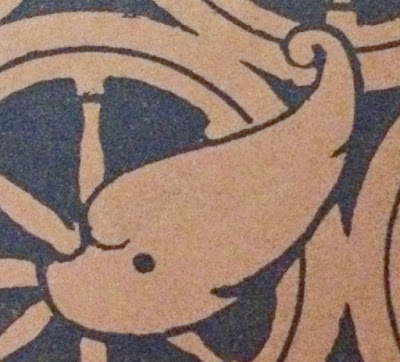 The book, as I wrote earlier, is bound in half grey buckram, with pasted on white cover paper displaying a repetitive design printed in blue. The winged wheel is Mercury's symbol, patron of commerce. The design on the front board contains a drawn label with a three-lined border and the title, printed in green and blue.

The original design drawing must have measured approximately 30 cm by 26 cm.
Posted by Paul van Capelleveen at 12:30 AM

For the Vale Press books Charles Ricketts designed fourteen different patterned papers. After the closure of the press he hardly ever designed such papers, but there are two exceptions, late in his life. In the meantime, he made designs for bookbindings in linen and parchment, and also designed paper covers and dust wrappers. The two patterned papers date from 1924 and 1931.

The first edition of Bernard Shaw's play Saint Joan was published in June 1924, followed in October that year by an édition de luxe with illustrations by Ricketts. The plates were based on his stage settings and sketches for the London performances of March 1924 (the play had received its premiere in New York in December 1923).

The patterned paper on the boards (on a quarter linen binding) show a repeti­tive design of arms, printed in blue, and with a label printed in black, dark blue and green. Alternately, two rows of coats of arms are depicted. One row shows the coat of arms of Saint Joan (32x32 mm): two French lilies (fleurs-de-lis) in an azure field; a sword with hilt and guard in the middle. At the top should have been a crown, but Ricketts deleted that detail. The other row shows three French lilies in an azure field (the coat of arms of the French king Charles VII). This coat-of arms is slightly larger than that of Saint Joan, measuring 34 by 33 mm. In between the coat of arms crowns (again with lilies) fill up the space.

The coats of arms are not all identical; there are small differences: for example, the curved leaves of the lilies are sometimes rounder, sometimes thicker.


The title label at the top is placed in the middle of the patterned paper, slightly to the right of the cover, because of the linen binding. At first sight, the design seems to be symmetrical, with the two weapons on the left and right, and the title in the middle and below. But the word "with" has been shifted slightly to the right, and while the text underneath is fairly central, the flower and the circled dot are placed asymmetrically, creating a livelier design.


Similarly, the title label on the dust jacket is not symmetrical. The title and author's name are slightly to the left of the centre and the decorations to the right are closer to the line border. The drawing on the dust wrapper is characterised by a complex symbolism.

On the dust wrapper Saint Joan hangs (as it were) crucified above the pyre. The pattern of her dress shows the French lilies again.

A few years ago we published a book about the true history of Ricketts's mother: Charles Ricketts's Mysterious Mother. (There are only a few copies left for sale).


Now we are working on a companion piece: a book about Ricketts's father, the sea painter Charles Robert Ricketts (1838-1883). Details will follow later.
Posted by Paul van Capelleveen at 12:30 AM