K is for Kinde.

Kinde are her answeres,
But her performance keeps no day;
Breaks time, as dancers
From their own musicke when they stray.


For some initials in the books of the Vale Press, Charles Ricketts made multiple designs, such as 'A', 'I' and 'T'. Up to ten variants of those were drawn. For two other letters - 'R' and 'K' - only one design was done.

Some letters do not occur as initials at all, such as 'X' and 'Z'.

'K' is one of those initials that was used for more than one book, but for which Ricketts didn't reconsider the original design. The initial 'K' appeared in three Vale Press books, the first one being Thomas Campion's Fifty Songs (1896). It is part of an incomplete alphabet of initials decorated with ivy. The alphabet was not completed as Ricketts, of course, never designed initials that he had no use for. There seems to be no relation between the text of Campion's poem and the floral decorations of this initial letter.

The 'K' design was used once in this book, twice in Henry Vaughan's Sacred Poems (1897), and the last appearance of this initial was on the first two text pages of the Vale Press edition of Robert Browning's Dramatic Romances and Lyrics (1899).


In some cases the initial has to compete (as has the blackness of the text lines) with the text on the other side of the paper, and in some cases the richness of the initial seems to be complemented by the intricate design of the border on the preceding page, and its impression into the paper, as is the case on page 6 of Robert Browning's Dramatic Romances and Lyrics.

The book as a unity is a complex phenomenon.
Posted by Paul van Capelleveen at 12:30 AM

So far, videos about Charles Ricketts or Charles Shannon on YouTube are minor and insignificant. However, some websites contain excellent material. One of those is Art UK, a website devoted to art works in British collections.

On ArtUK 27 paintings by Ricketts have been illustrated. The images and short descriptions also refer to their current location in one of the British museums.

The collection is still relatively small, but the images are outstanding, can be used for non-commercial purposes, and as variant paintings are also included some comparisons can easily be made. In Ricketts's case, for example, we have two versions of his painting of Don Juan in the graveyard. One version (from the Government Art Collection, London) is called 'Don Juan and the Equestrian Statue', the other version (now at the National Galleries of Scotland) is called 'Don Juan and the Commander'. 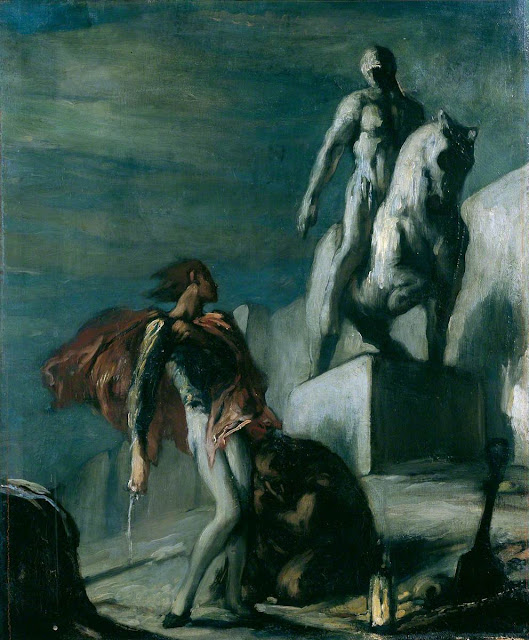 Charles Shannon's work is represented by 59 works.
Posted by Paul van Capelleveen at 12:30 AM

On YouTube, illustrations of the work of Charles Ricketts have been collected as stills in short videos. Nothing spectacular, usually low res pictures taken from internet, lacking logical order, and published without comment or context. (See blog posts No. 151 and No. 188).

Another example of a YouTube film of which the intention is unclear was published almost a year ago. 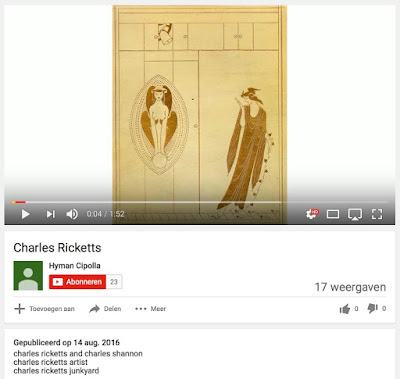 On 14 August 2016 Hyman Cipolla published this film, called simply 'Charles Ricketts'. The accompanying guitar music has been used for other videos by the same maker.
Posted by Paul van Capelleveen at 12:30 AM

J is for James.

James John Garth Wilkinson, born so early as January 1812, still lives; and still his tall strong frame wears a memory of the robustness of his long youth. The most of his life abnormally active, the harvest of it is little "sensational."

The initial 'J' was designed for inclusion in the third number of Shannon's and Ricketts's magazine The Dial that appeared in October 1893. It adorned an article by the poet John Gray. Wilkinson (1812-1899), being a translator of Swedenborg and a student of William Blake, believed in automatic dictation, a form of poetry that was felt to be inspired by religion, or as Gray wrote himself: 'writing from "Influx" [...] is either a religion or a madness'.

The wood engraved block was used as the letter 'J' only once. (*)

The initial was used again though, several years later, on the first text page of The Poems of John Keats, volume I (1898).

Here the initial 'J' is used for the second line of Keats' most famous long poem, 'Endymion':

A thing of beauty is a joy for ever:
Its loveliness increases; it will never
Pass into nothingness; but still will keep
A bower quiet for us, and a sleep
Full of sweat dreams, and health, and quiet breathing.

Usually, Ricketts only designed one initial for a poem, but his admiration for Keats induced him to use three differently styled initials for the first two text lines of 'Endymion': an oversized open capital 'A' that was connected to a small open 'T' within four dark leaves, followed by the 'I' for 'Its'.

However, this 'I' was not a new design. Instead, the older design for the 'J' was used, although it was now set upside down, so that it would look less like a 'J' and more like an 'I'.

The letter can easily be identified as the earlier 'J' by the three berries in the upper left corner, they should occur in the lower right corner.

It must have been a mistake to insert this electrotyped initial letter, probably the fault of the typesetter at Ballantyne's where a hand press was set apart for the Vale Press, and were these initials were stored. It is an easy mistake to make, as there were many 'I' designs - the 'A', 'I' and 'T' are the initials of which Ricketts designed up to ten variants - and as the 'I's and 'J's were similar in design, a 'J' held upside down may easily have been taken for an 'I'.

If Ricketts had noticed this while proofreading, would he have cared?

(*) Note: In her bibliography, Maureen Watry, erroneously states that the same initial was also used in the subsequent number of The Dial.
Posted by Paul van Capelleveen at 12:30 AM