287. News about the Grave of Cornelia Ricketts

Around Christmas, I received an email from Genoa in Italy, the city where Charles Ricketts's mother died in 1880. Her grave was in the English cemetery, which was closed in 1881, and a new graveyard was arranged for in the English corner of the Cimitero Monumentale di Staglieno.

So far so good. When Constance Wilde, wife of Oscar Wilde, died in Genoa in 1898, she was interred here.

However, when Paul Delaney, Ricketts's biographer, went on a search for the grave of Ricketts's mother, who was so important for his early education, it proved elusive. There was no record of it, and the plot contained no monument to remember her.

In October 2016, we published J.G.P. Delaney and Corine Verney's book Charles Ricketts's Mysterious Mother. Who could have known that only a month later Cornelia Ricketts's grave would be found by a local historian?

In November 2016 Marco Cazzulo uncovered a gravestone with the text:

Marco Cazzulo works with a group of volonteers who go out and clean the graves of Genoa. This Associazione "Per Staglieno" ONLUS-Genova is involved in maintaining and cleaning the burial places of the Cimitero Monumentale di Staglieno.

Cazzulo is a historian who searches for stories about Genoa's past and the people who lived there, including passers by, like Ricketts's mother. Graves are part of the history of Genoa.

Marco Cazzulo himself found the grave of Cornelia in the Staglieno cemetery (Genoa).

The grave was uncovered in a part of the graveyard that was in a bad condition. Stones were hidden to view by ivy, roots, weeds, and dirt. After the graves were cleaned, some stones revealed names and one of them was Helene Cornelie Ricketts. This is the name on the stone, although Ricketts's mother had been born in Rome as Cornelia Pia Adeodata Marsuzi de Aguirre.

Next time you visit the grave of Oscar Wilde's wife, place a flower on Cornelia's grave and send me a photo.

[Thanks are due to Marco Cazzulo for sharing his find with us, and for allowing us to use his photo's of the grave.]
Posted by Paul van Capelleveen at 12:30 AM

A thing of beauty.

Book I of volume I of the two volume edition of The Poems of John Keats published by the Vale Press in 1898 opens with a large initial A, starting the first verse of 'Endymion'. Along the first line of the poem more initials meet the eye.

The second word of the first sentence in fact is a small initial T within a quartet of leaves, and the second sentence starts with a large initial 'I' for 'its loveliness'. Then the eye is dazzled by a variety of capitals and lower case letters that are not asked for by the poet.

Opening pages in the private press era sometimes echo the earlier nineteenth-century habit of showing off as many different typefaces as a printer could supply on a title page or cover, as a testimony of craftsmanship and excellence.

What we see on this page, and especially the smaller initial T, might be described as a remnant of Charles Ricketts's early career as an illustrator of poems for magazines in which he was asked to display an atmosphere of medievalism or of Tudor period pieces for which he used a sprinkling of small initials and fleurons.

This said, the image is only a small part of two harmoniously designed facing opening pages for the poems of one of Ricketts's favorite poets, John Keats.

A is also A for Adoration.
Posted by Paul van Capelleveen at 12:30 AM

Last Monday, we dismantled the exhibition in Museum Meermanno that celebrated the 150th anniversary of Charles Ricketts, 1866 - 2016. It has been a wonderful experience to install it, bringing together books, autograph letters, prints, and portraits to tell a new story about Ricketts as an illustrator of the Parables and of Oscar Wilde's Poems in Prose. Visitors loved the small but exquisite contents of the exhibition, and of course it was a great honour to show it to Dame Byatt last November.

It all ended with a cake for the staff of the museum, inscribed with the name of Ton Leenhouts from whose collection most of the works were on loan. 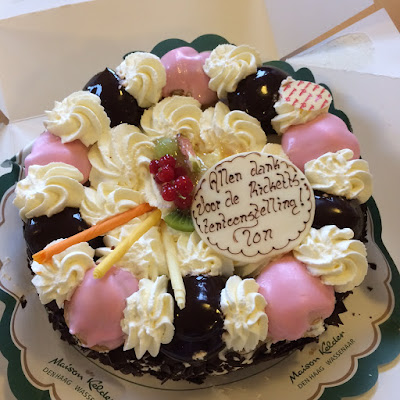 284. Between Jesus and Oscar Wilde

This weekend, last opportunity to see the exhibition about Charles Ricketts at the Museum Meermanno in The Hague. It closes on Monday morning.

On view are three copies of one of the later works by Ricketts, Beyond the Threshold, a book that he wrote, illustrated, and designed (including the binding) himself.


Many copies of this book found their way to museums and libraries. In 2015 I examined a copy at the McGill University Library, Rare Books and Special Collections in Montreal. During the SHARP conference The Generation and Regeneration of Books (organised by the Université de Sherbrooke, the Groupe de recherches et d’études sur le livre au Québec, McGill University, and Bibliothèque et Archives nationales du Québec, 7-10 July 2015), I had the opportunity to see quite a number of books, assisted by welcoming and well informed staff members - special collections rooms at university libraries can be delightful study centres, and this was one of those places.

Their copy of Beyond the Threshold has come from the collection of William George Colgate (1896-1970), an English art historian, who moved to Toronto. One of his major publications was Canadian Art, Its Origin and Development (1943). He counted a number of printers among his friends, and collected several hundred books 'of typographical interest', as the university's website informs us. His collection was particularly strong in the fields of the history and technique of printing, calligraphy and letter forms, type design, and typographical productions, type founding and type founders' specimens and printers' manuals and handbooks, including those for colour printing and paper making. The collection was given to the library in the 1940s and 1950s.

An image of the binding of Beyond the Threshold has been published on the university's website Art Deco and the Decorative Arts in the 1920 and 1930s.

Between Jesus and Oscar Wilde

A quote from the exhibition leaflet:

In 1929, Ricketts published a book of dialogues of the dead, Beyond the Threshold. After his death, the narrator awakens and meets Voltaire; a number of famous people follow, including Oscar Wilde.


Wilde recites a previously unpublished prose poem by Oscar Wilde, 'The Mother of God'. Maria dwelt in the house of her mother. Narcissus tried to seduce her with gifts of apples and garlands, but she ignored him, until, one day, they were in a corn field. She consented, and undid her girdle. Then, a great light appeared, a golden dove flashed his wings, and a voice like the voice of an angel told her that she was highly favoured, and that the Lord was with her. Ricketts's drawing shows Maria, her lover, the dove, and the angel. Like in Wilde's story, Ricketts left unsaid what was about to happen.
In between two prose poems, Ricketts lets Wilde explain why Judas came to kill himself. It was not because of his betrayal of Jesus: Judas had given his thirty pieces of silver to Maria Magdalene, and when he came to collect his reward, he found her in bed with a lover. He went out and hanged himself. In Ricketts's drawing Judas is on the threshold. The room is full of love, scents of flowers, and light. Outside, in the world of Judas, there is a bare tree under a dark starry sky.
Beyond the Threshold was intended as a private publication by Ricketts, but all 150 copies were distributed by The First Edition Club. Ricketts gave away quite a few presentation copies. A letter to the artist and critic Cecil French accompanying one of those copies stated: 'The Wilde portions are really like and two of the prose poems almost authentic'.
All copies were bound in red leather after a design by Ricketts (his monogram 'CR' appears at the bottom). According to a letter to the editor of The First Edition Club, A.J.A. Symons, a brass plate for the binding had been made.

In the last part of Beyond the Threshold Ricketts introduced the original 'author' of the parables, Jesus Christ. Jesus recounts a new version of the parable of the wise and foolish virgins. The virgins set off to meet the 'bridegroom', five of them brought oil for their lamps, and five of them forgot about the oil. In the night the bridegroom calls them, and the latter virgins go out to buy some oil, as the others do not want to give them theirs. When at last they arrive, they find the door closed to them. That is, according to Matthew 25:1-13.

However, Ricketts has given Jesus another story to tell. On their journey, the foolish virgins had woven garlands of the flowers they found, and the bridegroom welcomed those as gifts, while the wise virgins were reproved for bringing no gifts. This apocryphal parable is typical of Ricketts. In Beyond the Threshold, he twists around the words of all celebrities.

On view until 8 January


'Between Jesus and Oscar Wilde, Charles Ricketts (1866-1931) as an Illustrator of the Parables and Poems in Prose'

A commemorative exhibition celebrating Ricketts's birth in 1866, 150 years ago.
Museum Meermanno, The Hague
More information about the Meermanno exhibition can be found on the museum's website.
Posted by Paul van Capelleveen at 2:13 PM