148. The Example of Silverpoints

Thomas Bird Mosher's career as a publisher took off in 1882 when he became a partner in McClellan, Mosher & Co., a firm that ended in bankruptcy in 1889. Mosher established his own firm, Thomas B. Mosher Company, the same year, selling stationary and law books, but soon turning to literature. By that time - he was nearing forty - Mosher had also acquired a small personal library, of which he made a catalogue: there were over 350 books. In 1891 and 1892 he published his first literary works, written by George Meredith and James Thomson.

His third publication was the first of 'The Bibelot Series'. This poetry anthology, Songs of Adieu, appeared in November 1893.
The book's format and the type size are reminiscent of another book of poetry that had appeared in London, John Gray's Silverpoints, issued in March 1893. It seems that Mosher owned a copy before the end of the year, as the layout of Songs of Adieu is almost certainly inspired by it. In 1906 he would copy its cover design for a catalogue.
Mosher's bibliographer, Philip R. Bishop, argued that obvious similarities in layout connect Silverpoints to Mosher's Songs of Adieu:

Both use an italic type, and pages are numbered using Roman numerals. Both employ left-justified titles (set in even capitals) to the poems. Both use a large capital letter to begin each poem, the top of which extends above the other letters of the line. Both begin the first word of all the other lines of verse with an upright Roman capital letter followed by all italic letters.

This shows that Silverpoints must have served as a model, as the layout was far from common practice, and I agree. The type fount used for Mosher's book was an 8 points Elzevir Italic, that was made available by the Dickinson Type Foundry in 1889. Mosher's printer in Portland, Smith and Sale, must have acquired it.(*)

For Silverpoints, another type and size were chosen. Ricketts - by the way, this is the first time that the type has been looked at seriously - used a 9-point Caslon typeface, the Caslon Old Style Italic, which he combined with Lining Old Style for the roman characters.
It has been noted that two different types of 'h' appear in Silverpoints (**). Caslon types came with some extras, which were called 'Peculiar Italic Sorts' that were supplied with founts from 36-point to 8-point. Ricketts made use of those peculiar types, sometimes showing the two different characters 'h' (one almost resembling a 'b') in one sentence, as in a translation from the French of Baudelaire. See the words 'thy head' in line 7.
Ricketts also made abundant use of swash letters, which were part of the 'peculiar sorts'. In Gray's poem 'Lady Evelyn' (page viii) several of those can be seen; the 'N', 'R', and 'C' are the most eccentric. Mosher did not imitate these peculiarities.
Charles Ricketts, in 1893, considered the book to be a unity, and used only one type fount. Mosher did not. The last text page, for instance, introduces a black letter (or gothic type), of which there were many in the early nineties of the nineteenth century.
But then, Mosher was not as consistent in his layout as Ricketts strove to be, and did not treat the book with Ricketts's firm convictions. For example, the page numbers were in roman numerals (such as 'lxiii'), however, the 'Contents' page (a page that Ricketts discarded whenever possible) refers to the pages in arabic numerals ('62').

Ricketts's title page for Silverpoints is as austere as it gets, with only two small blocks of text, containing title, author's name and imprint, all in small Caslon capitals. Mosher tried to embellish the title page, for which he used colour, but not the Elzevir types.
The page was not typeset, but fully hand-drawn, and photographically reproduced. In the title, for instance, we can clearly see two different characters 't' in the word 'little', and the same goes for the others. This is far removed from the principles of the revival of printing that were to be laid down in tracts before the end of the century. But even after the publication of William Morris's 'The Ideal Book', Mosher would not convert to the use of only one fount for a book. The nineteenth-century practice of displaying several types on a title page or on a cover would live on in his publications.
(*) See William E. Loy, Nineteenth-Century American Designers & Engravers of Type (2009), p. 56.
(**) See Peter J. Vernon, The Letters of John Gray (1976), p. 120.
Posted by Paul van Capelleveen at 12:30 AM

147. Charles Ricketts, dressed as a pig

In February, I had wanted to write about the Edwardian Culture Network, a website devoted to 'various aspects of culture in Britain between the years 1895-1914', especially art and literature - but too many other subjects came up.

The Edwardian Culture Network has published two main articles on Ricketts. In January one of its founders, Samuel Shaw, wrote a review on Nicholas Frankel's selection of writings by Charles Ricketts, Everything for Art, and a month later Shaw published a piece in the 'Edwardian Encounters' section on a painting by Ricketts, 'A Fancy Dress Dinner Party' (1904).

A small canvas in the Tullie House Gallery, Carlisle, offers a fascinating insight into the social life of a small group of Edwardian artists. The painting, by the multi-talented Charles Ricketts, depicts seven guests assembled at 11-13 Lansdowne Road, Holland Park, the house of Sir Edmund and Lady Mary Davis, on the 10th December 1904.

About the people that are depicted in the painting, Shaw writes:

Ricketts dressed rather awkwardly for this occasion, and wore a masque of a pig's head, which wasn't the success he had hoped for. More of Shaw's fascinating essay on 'A Fancy Dress Dinner Party' can be read on Edwardian Encounters on Edwardian Culture Network.
Posted by Paul van Capelleveen at 12:30 AM

146. The Mosher imitation of Gray's Silverpoints

In some of his publications, Thomas Bird Mosher reproduced Kelmscott Press initials designed by William Morris, and borders from Eragny Press books cut on wood by Lucien Pissarro, and he also used designs by Charles Ricketts. This unusual mix-up of designs by different artists is not always a lucky one, and was done without the consent of the artists.

For one of his publisher's catalogues Mosher re-used a Ricketts design that was quite well-known.
John Gray's Silverpoints had been designed by Ricketts for Matthews and Lane in 1893. The wavy lines and leaves on the cover were used for Mosher's 1906 catalogue.


The design was adapted - the catalogue was broader in format than the original book. Mosher added a pattern of wavy lines including a column of leaves to the right-hand side, as Phil Bishop recorded in his bibliography, Thomas Bird Mosher. Pirate Prince of Publishers (1998, p. 216-217).

The original design measures 212 x 103 mm, while the Mosher adaptation is 212 x 118 mm. The original 'CR' monogram is still positioned in the lower left-hand corner, however, the binder's stamp (Leighton, Son, & Hodge) that appeared in the lower right-hand corner of the Gray edition, is now some 15 mm from the corner on the right, as another 15 mm of wavy lines and leaves have been added to the right side. Instead of lines of three leaves, we now see lines of three leaves alternating with lines of four leaves.


But there is more to be said about the adaptation. To begin with, the joint between the original and the new wavy lines is visible; a small irregularity in the new block occurs at the top between the last original line and the first new one.

Although it seems that front and back cover are the same, the placement of the design was slightly different. Due to the French groove, towards the spine, the row of willow flowers that is attached to the left part of the border, is not completely visible. On the back cover, however, these flowers have more room. From this we may conclude that Mosher did not copy the front cover, but the back cover of Silverpoints. 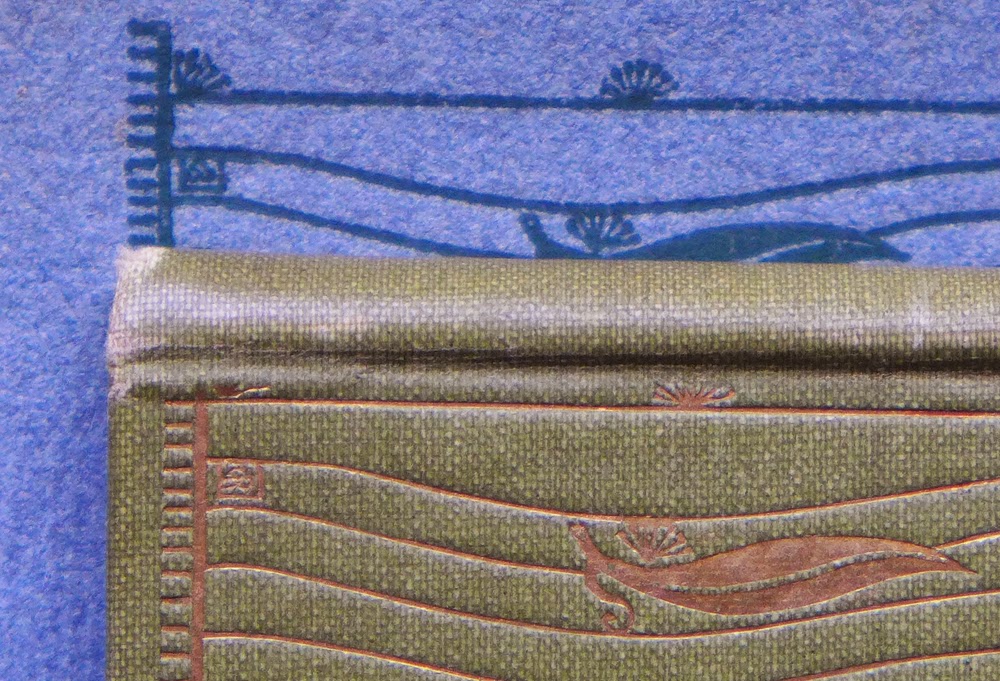 And there is another detail to consider. At the base of each willow leaf is a stipule, and these show quite some variation in design. Some stipules are curved more than others, and some end in a dot; some of them touch the nearest wavy line, while others cross that line. The stems of the large leaves themselves are all individually designed, most of them pointing to the left, some more than others, while only one points to the right. From this, it should be possible to deduce which column of leaves was reproduced by Mosher for the new line. If we try to find the originals for these new lines and leaves, however, we get stuck. It turns out that the new leaves and flowers and lines are also designed (and drawn) individually.

Perhaps, Mosher realized that a simple photo-engraved copy of one of the original lines would, as an addition to Ricketts's original design, have reduced its liveliness.


Mosher's vellum copy was sold for 24 dollars. In the early 1980s this copy was traded by the firm of Rota's in London; its current whereabouts is unknown.
Posted by Paul van Capelleveen at 12:30 AM

Over a year ago the collection of Laurence W. Hodson was sold at auction. The vellum copies of Vale Press books in specially designed bindings by Charles Ricketts fetched high prices. However, a paper copy of Elizabeth Barrett Browning's Sonnets from the Portuguese (1897) in a binding of white pigskin, designed by Ricketts - the design is in the Victoria and Albert Museum - remained unsold.

To my knowledge, only two paper copies were bound thus, and this one has the bookplate of Laurence Hodson. It also has the monogram of the publishers, HR (Hacon & Ricketts). The other copy does not have this monogram, although the design is identical in every detail, that is, almost identical, as the bindings were handmade, and there are very small differences in the positioning of certain gilded elements. In fact, each binding is unique.

After the sale of 14 April 2013, the Hodson copy was entered for auction again in November. The original estimate of £1500-£2000 was lowered to £1000-£1500, but at the auction of Important Books, Manuscripts & Works on Paper (Bloomsbury Auctions, 28 November 2013) the Hodson copy remained unsold once more.

Then, a description of the same copy appeared in the auction catalogue Printed Books and Manuscripts, Bloomsbury Auctions. At the sale, on 17 April 2014, the Hodson copy was finally sold with an estimate of £500-£700. It realized a hammer price of £750.

Paper copies of Vale Press books in leather bindings designed by Ricketts are extremely rare, and it appears that only some early books were bound thus. The special bindings were usually done for vellum copies. An inventory of these bindings, however, is not yet available.
Posted by Paul van Capelleveen at 12:30 AM