396. Two Deluxe Copies of The Sphinx

On 30 January Forum Auctions in London sold the collection of the late Bruce Beatty, and three weeks later, on 20 February 2019, Christie's in Paris sold the library of Marc Litzler. Both collections could boast of a deluxe copy of Oscar Wilde's The Sphinx, designed and illustrated by Ricketts. Only 25 copies of this large paper edition were made, two of which came on the market in less than a month.
The description of the Beatty copy mentioned that the tissue guard was present (for the Litzler copy this detail wasn't mentioned), and the Unbleached Arnold (Ruskin) paper was said to be 'very slightly foxed but barely affecting text'. The condition of the paper of the Litzler copy seems similarly affected, the description mentioned 'des rousseurs que l'on rencontre toujours dans les exemplaires du tirage ordinaire', which is true, except of course that the ordinary copies have been printed on paper of a slightly lesser quality (also Arnold, but thinner, and more prone to foxing). The special type of Arnold paper should have been in excellent condition.


The photographs seem to indicate that the Beatty copy, although 'very lightly soiled', looks fresher than the Litzler copy, the vellum of the latter showing some browning, while both copies have retained the original binding ties.

395. Ricketts and Shannon as Old Masters of the Future

About a week ago Brill publishers (Leiden/Boston) published Art Crossing Borders. The Internationalisation of the Art Market in the Age of Nation States, 1750-1914, edited by Jan Dirk Baetens and Dries Lyna. For this compilation 'our' contributor Barbara Pezzini wrote an essay entitled '(Inter)national Art: The London Old Masters Market and Modern British Painting (1900-14)', addressing the themes of national versus international art, and old masters versus modern artists, and in particular how British artists of around 1900 dealt with the European art of the past.


Barbara Pezzini currently is Editor-in-Chief of the journal Visual Resources, working on research projects for the London National Gallery and ArtUk.

The book Art Crossing Borders is published in open access and all essays are available for free on the Brill website. In her essay Pezzini examines the situation in London at a time when once expensive late Victorian paintings had lost a large deal of their financial value, and in which a new generation of painters sought to associate themselves with either modernism and Italian, Dutch or French paintings from the Renaissance, while all around them a diverse range of artistic endeavours by the likes of academic historical painters, symbolist artists, and impressionistic painters coexisted.

Pezzini argues that the information networks of artists, critics and dealers were involved in a debate about the historic British school of painting and the relationship of modern art to 'modernity' on the one hand and to art history as a whole on the other. Work by modern artists such as Wilson Steer, William Rothenstein, Charles Ricketts and Charles Shannon was, for example, shown at the Carfax gallery alongside Italian, Flemish, French, Dutch old master prints and paintings (Pezzini reproduces an advertisement from The Burlington Magazine, March 1903). Likewise, writers about old masters also wrote about modern artists, and these artists were seen as connoisseurs and experts.

Those writers were invariably active as curators of exhibitions of museums (Charles Holmes for example), others were artists themselves (such as Ricketts), and most of them combined professional roles as scholar/artist and curator/art adviser for dealers. Today's professional integrity was not an issue yet. Most art galleries and shops had turned to old masters as a source of income after the decline in value of the Pre-Raphaelite paintings. Art critic and museum director Charles Holmes advised collectors to invest in modern artists who would become the old masters of the future (see his work Pictures and Picture Collecting, 1903, second edition 1910).

Ricketts and Shannon belonged to a group of artists, Pezzini argues, that acquired a cosmopolitan view of art; they were trained in Paris or travelled around Europe. They gathered in new societies, and showed their view of French paintings (Charles Conder is an example) or Venetian art (Charles Shannon). Ricketts fused 'Spanish and Italian mannerism' in his painting 'Crucifixion' (c. 1908).

Pezzini writes about Ricketts's painting that it 'finds in El Greco's Crucifixion (Toledo, Museo de Santa Cruz) [...], published by Cossío in 1908, its principal reference. Yet the torn drapery, dark sky and dramatic palette give his work a much more sombre atmosphere that hints towards a novel psychological despair and torment.'

The work of these relatively young painters - Ricketts and Shannon were nearing forty - was seen as 'reasonable in price' and 'a very safe investment' according to Holmes. The Burlington Magazine often mentioned modern art in commercial terms, and made comparisons with the art of the old masters, as was the case with Charles Shannon's tondo 'Hermes and the Infant Bacchus' that was likened to a work by Titian, and thus to an extremely valuable painting.

Pezzini asserts that the traditional interpretation of the backward glances towards old masters automatically dismisses these artists as old fashioned, nostalgic, parochial, and anti-modernistic. However, according to Pezzini, another possible reading based on her analyses of 'the intertwining of the art market, scholarship and artistic practice'  indicates that these artists 'aimed to live up to the comparison with the old masters and created a diverse cosmopolitan language'. It was not modernist art, still, it was art that dealt with topical concerns.

The same week that Pezzini's essay was published, another attempt to revalue the work of artists such as Ricketts arrived in the post. It appeared in the book historical review Book History (volume 21 for 2018, published January 2019) and was written by Anna Wager who won the Graduate Student Essay Prize for this essay on 'Photographs, Pens, and Print: William Morris and the Technologies of Typography'. Wager quotes Ricketts's remarks on type and argues that Morris who was in favour of manual processes didn't completely turn away from modern techniques, instead he used them to understand manuscript letters better during the formative processes of his new printing types.

These essays are sure signs of a renewed interest in the period around 1900, invoking alternative ways of looking at the past.
Posted by Paul van Capelleveen at 12:30 AM

Recently, an ephemera dealer in Moscow sold a Russian postcard with an image of Charles Shannon's lithograph 'The Incoming Tide' that was published by the artist in 1908/1909.


The British Museum describes the original lithograph as follows:

Two nude women on a beach, both seen from behind, one laying on the sand with head raised and the other kneeling with arms upraised and looking out to sea. 1908/9.

[See for an image the British Museum Collection Online.]

This lithograph can be compared to another one, called 'The Rising Tide', printed around the same time.

The Russian postcard was manufactured almost sixty years later, in 1957. The backside gives ample information, which was translated by my friends the poet Robbert-Jan Henkes and his wife Elena Pereverzeva, both translators from the Russian.

The card was published by the Изобразительное искусство, the Fine Art Publishing House in 1957. The title was given as 'High Tide', and the card was printed by the VNIIPPiT, probably the Всесоюзный Научно-Исследовательский Bнститут Полиграфической Промышленности и Типографии, or the Soviet Scientific Research Institute for the Graphic Arts and Typographical Industry.

The price was ten kopecks, and the number of copies printed was an astonishing 35.000.

The original lithograph had been printed  (apart from a few trial proofs) in 36 copies, of which twelve each were printed in green, sanguine and grey. The earliest proofs were printed in 1908, the edition was printed in 1909. The postcard reproduces the version in grey.

Why this interest in British art, and especially Charles Shannon in Russia, and why in 1957? Copies of his original lithographs were sold by dealers abroad, the earliest ones in Germany and the United States, but apparently they travelled all the way to Moscow, and were found appropriate as postcard images.

There might be more of these postcards.
Posted by Paul van Capelleveen at 12:30 AM

Private press books, and deluxe editions, have usually been treated well, and heavily annotated copies of Kelmscott Press, and Dove or Vale Press books are quite rare, as are copies with dog ears, public library copies being the exception.

Expensive books are like expensive cars, their owners don't like them to be scratched, touched, or sometimes even looked at.

The Sphinx by Oscar Wilde, designed and illustrated by Charles Ricketts, is one of the untouchables. There are dedication copies, and some copies come with bookplates, but rarely more.

However, Dartmouth College Library owns a copy that was extra-illustrated at some point. Extra-illustrated books were a vogue in the eighteenth- and nineteenth-centuries, often so many illustrations from other sources (portraits, topographical prints) were pasted in, that the book's original binding couldn't cope, and new bindings were commissioned to house the complete collection of the original pages and the additional prints.

The Sphinx had ten reproductions after pen drawings by Ricketts. The Dartmouth copy has an original watercolour on the half title.


This copy of The Sphinx was donated to Rauner Special Collections Library by Robert Minton (Dartmouth College Class of 1926). Robert Henry Minton (1904-1974) worked as a stockbroker in New York.

The illustration shows palm trees, a temple wall, a sphinx, and an incense burner, drawn in black and coloured in blue. There is a signature to the right hand corner of the watercolour. The artist is Frédéric Bourdin, a French illustrator. Not much is known about Bourdin. Between 1911 and 1921 he illustrated books for several publishers. 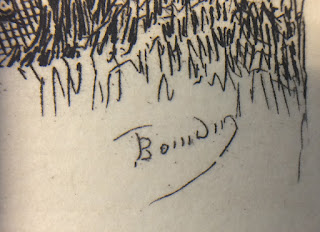 Other illustrated editions include works by Balzac (1911), Moreau (1919), and Guerrazzi (1921). Extra-illustrations was a side-line for him. He apparently made watercolours for an edition of Octave Mirbeau's Le Journal d'une femme de chambre, and also tried his hand at extra-illustrating, or 'illuminating', English literary works, such as Alfred Tennyson's Maud (1855), and Edwin Arnold's The Light of Asia (1879). These books have different English provenances, suggesting that Bourdin was asked by English dealers to add illustrations in water colour.

Almost no record of his life has survived, it seems, and most dictionaries of engravers and artists do not mention him. The 1999 edition of Bénézit (Dictionnaire critique et documentaire des peintres, sculpteurs, dessinateurs et graveurs de tous les temps et de tous les pays par un groupe d'écrivains spécialistes français et étrangers) mentions three works illustrated by Bourdin, but when and where he was born or died is not known. His work is characterised as follows: 'Son oeuvre conserve un hiératisme intellectuel cher aux synthétistes.' His sober and cerebral work was influenced by the post-impressionists.

How he came to make an illustration in this copy of The Sphinx is not known.
Posted by Paul van Capelleveen at 12:30 AM