After Edith Cooper died, her partner, Katherine Bradley, collected Edith's poems (written from 1899 onwards). They were published in August 1914 under their joint pseudonym Michael Field as Dedicated. Charles Ricketts designed the linen binding, of which the front cover and spine are decorated. The original design drawings have been preserved in The Hunterian at the University of Glasgow. 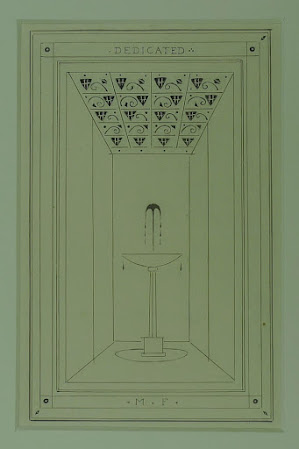 While some critics recognise a baptismal font on the cover and on the back two connected rings, I think we see a fountain (on the cover) and a thyrsus - a staff topped with a pine cone - and  two laurel wreaths (on the spine). See my earlier blog about Three Spine Designs by Charles Ricketts.
The drawings are (as usual) larger than the book: 28.8 by 22.7 cm - the book measures 19,8 by 13 cm. They were copied and photographed (the image then reduced in size) for the making of a brass block to stamp the design on the binding.
The drawings have inscriptions such as: 'cut same size as drawing. Photograph this | onto the brass. Do not copy scratchy workmanship', and 'cut this quite clean | do not imitate scratches | of pen in letters etc'.
The blockmakers kept to the brief, sometimes making small necessary improvements and sometimes not.
In his drawing, Ricketts placed small acorns in the far corners, but he forgot the acorn in the top left corner. This has been corrected.
For the coffered ceiling above the fountain (which is in a niche or a chapel) Ricketts drew a pattern of five rows with different ornaments in each row. In Ricketts's design the ornaments in each row appear to be identical, but they are all individually drawn and slightly different from oen another. During the processing for the block, the ornaments per row were standardised. Whether this was the intention or not is impossible to say, but in the Vale Press ornamental papers that Ricketts designed, such minor variations were maintained.
The support for the ceiling is represented by vertical lines. The lines in the middle do not connect at the same height at the top (lower on the right).
Also, they seem to protrude through the floor. This has been retained in the block for the binding.
The handle of the thyrsus on the back of the book is a little too neatly copied. Ricketts's pen faltered twice and the lines are now interrupted in two places. This was clearly not Ricketts's intention.
Thanks to the digitisation of objects in museums, libraries and archives researchers can study Ricketts's book designs with new interest and scrutiny.
Posted by Paul van Capelleveen at 12:30 AM