In 1929 the Curwen Press printed Charles Ricketts's dialogues of the dead Beyond the Threshold, a publication of The First Edition Club initiated by A.J.A. Symons. Ricketts wrote the text, made five ink drawings for the illustrations and designed the bookbinding of which the front and back are identical. This way, only one brass plate had to be made for the binding (and a smaller one for the spine), which saved a considerable amount of money. From a letter from Ricketts to Symons (now in a private collection), we know that Ricketts initially forgot to charge for this plate which he remembered after finding the receipt of ₤7.

The original sketch for the binding decoration was donated to the British Museum by Riette Sturge Moore in 1962.

The binding shows some familiar elements often found in Ricketts's designs, such as the dotted circles, dots, small and large acorns, and half circles. 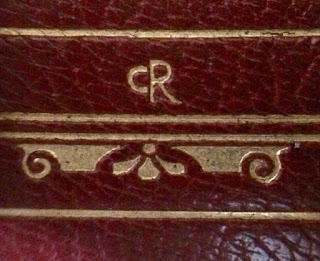 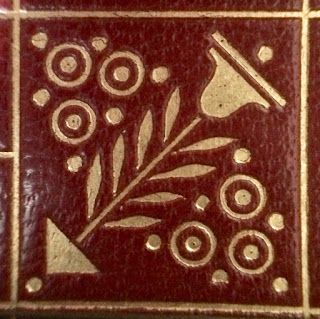 The design could be reproduced photographically, and then a brass plate was manufactured from which the design could be printed in gold on the red full morocco binding (goat skin). The sketch shows that Ricketts carefully finished his design. To the left is a correction with chinese white for the lines of the second border. In the reproduction only the lines remained visible.