Charles Shannon's first lithograph from 1889 was printed in grey, which would remain his favourite colour for this medium throughout his career. From the second lithograph, 'The Cellist' (1890), he made prints in different colours. There are copies in black ink, and there are copies in green. Usually his lithos were monochrome, although there are exceptions: there is one lithograph in four colours and there are a few in a combination of blue and buff and buff and green.

The printing of the lithographs on his own press took place in three periods. The first produced his most popular and subtle lithographs and ran from 1889 to 1898. The second period started in 1904 and lasted until 1909, the period in which he achieved fame as a (portrait) painter. The third period was short and started in the First World War: 1917-1920.

'The Swimmer' was issued in 1905. It measures 333 x 485 mm, and is initialled C.H.S. and dated in the stone. There were impressions in sanguine or in grey, and they were sold through P. & D. Colnaghi and Obach.

A description of this lithograph was given by R.A. Walker in the Print Collector's Quarterly (December 1914): 'Three men crouch at the edge of a swimming bath whilst a fourth figure is swimming overarm to the right. Another man on the left is climbing out of the bath.'
A comparison of the prints does not reveal any pictorial differences; there is only one state; the lithograph is not touched up in between, but only printed in a different colour of ink. The number of copies printed in each colour is unknown; the total number of prints was forty.

However, there are considerable differences between the effects of a print in grey and one in sanguine. The initials and the year in the lower left-hand corner are brighter, but so are other details. 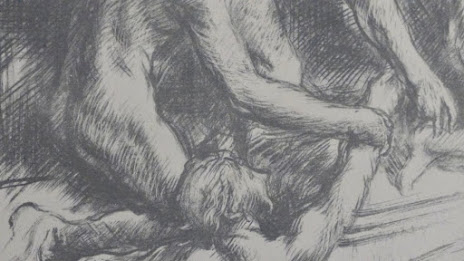 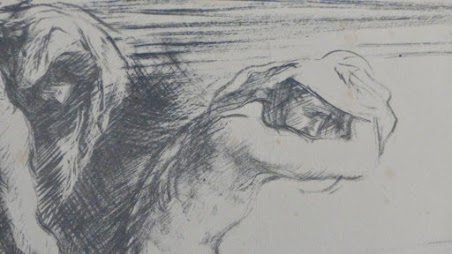 Details in grey look more subtle than those in sanguine, in which they seem more distinctively pronounced. The overall impression of the print in sanguine is more dramatic, more focused on the actions, while in grey it is more dreamlike and atmospheric. 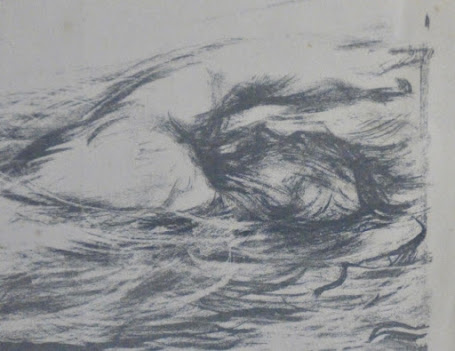 Both versions were signed in pencil by Shannon, if requested. (He never did so with lithographs printed in a magazine).

The question is, of course, which version he preferred. Judging from the many colours he used, one can assume that he was looking for certain effects, or that he wanted to satisfy the taste or personal preference of his buyers. The latter is not very plausible, at least not at the beginning of his career, but later, when his paintings attracted less attention, his dealer may well have asked him to use more colour.
To be continued.
Posted by Paul van Capelleveen at 12:30 AM