518. Sea-Folk, A Lithograph by Charles Shannon

Charles Shannon produced lithographs from 1889 onwards, but there were years when he did not work in this medium. The first period of 54 lithographs ran until 1897 (one was published only a year later), after which he did not devote himself to lithography again until 1904. The second period lasted much shorter, from 1904 to 1909, and resulted in 29 lithographs.

The last period began during the First World War, in 1917, and ended in 1920. After twelve more lithographs, Shannon abandoned this medium. (Other lithographs were designed, by the way, but they never got beyond the trial stage. There is a lithograph from 1888, predating the first one, from which four proofs were pulled; no Shannon lithographs dated after 1920 are known to exist.)

In his catalogue, The Lithographs of Charles Shannon 1863-1937 (published 1978), Paul Delaney  only reproduced lithographs from the first period.

The last lithograph from the first period is 'Sea-Folk' (1897). It is not the largest lithograph Shannon ever made, but it is the one with the most figures - I think I can count twenty-five people. In the 1902 catalogue of Shannon's lithographs (with an introduction by Ricketts) the scene is described as follows:Groups of girls and children are playing in the wash of the sea. The background is filled with a breaking wave. Fifty-six proofs exist printed in green, in black, and in blue.
(Charles Ricketts, A Catalogue of Mr Shannon's Lithographs, no. 54, p. 31).
The British Museum owns a copy in green (illustrated here). Copies in black ink look very dark indeed, as if the scene is a nocturnal one. The British Museum has an impression in black after the cancellation of the plate.

The variety of actions and postures is maximised within a horizontal strip in the centre of the image. Above this, the foam heads of the surf are depicted. In the foreground, the low water on the coast can be seen. Some figures are sitting on the sand in the shallow water and are drawn almost entirely in white line.

Children play with a fish that they have apparently caught, raising it triumphantly to the sky. Another group of children try to catch another fish in the shallow water. 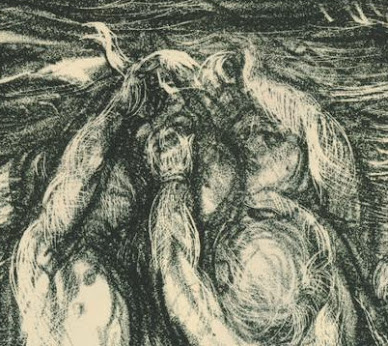 One wonders, of course, if the fish would not have fled long ago in the face of this crowd of children amusing themselves so loudly; Shannon probably combined several observations at the beach.
Posted by Paul van Capelleveen at 12:30 AM