For each of Oscar Wilde's books published by Osgood, McIlvaine & Co. Ricketts designed a new publisher's mark, but he did not do so for Thomas Hardy's books. The publishers did not commission new designs for the binding and title pages of for Tess of the d'Urbervilles (fifth edition, in one volume, July 1892), nor forLife's Little Ironies (February 1894). They simply reused his design for A Group of Noble Dames, including the publisher's mark (Device Ia). 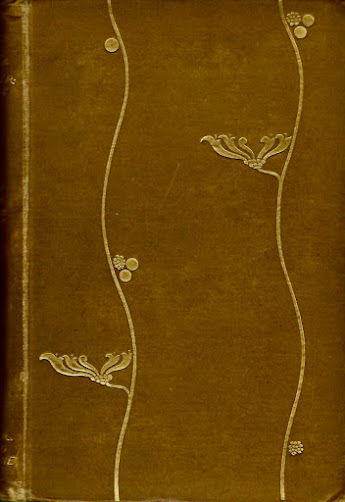 However, for the first edition of Tess, Ricketts made one of his better-known bookbinding designs with long, wavy lines featuring honeysuckle flowers and stems. The novel appeared in three volumes in December 1891. For this elaborately designed book, Ricketts did not design a new publisher's mark. It was his last assignment for Osgood, McIlvaine, and he had already drawn five different publisher's marks for the firm. It remains remarkable that this time he made no effort.