341. An Oscar Wilde Book Signed by Ricketts and Shannon

The 51st California International Antiquarian Book Fair opens at the Pasadena Convention Center on Friday 9 February (open 9-11 February). More than 200 booksellers from around the world will exhibit their treasures, all for sale of course.

Last week, John Windle Antiquarian Books (San Francisco) published a list of 32 Works of Oscar Wilde and Aubrey Beardsley, and most of these will be on view at the fair.

One of the books that will interest Ricketts, Shannon and Wilde devotees is a copy of Oscar Wilde's A House of Pomegranates (1891). This is a signed copy of the first edition of Wilde's short stories, although, surprisingly it is not signed by the author himself, but by the two designers and illustrators, Charles Ricketts and Charles Shannon. That is quite exceptional; I have no knowledge of another copy with their signatures, and the artists rarely adorned a book with their joint signatures. An absolute rarity. 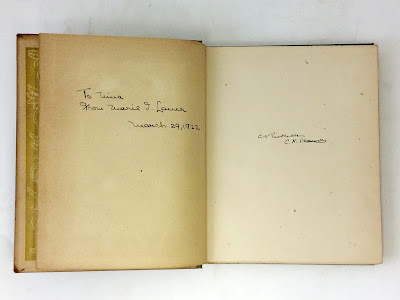 The provenance of this copy is only partially established by the presence of two bookplates and one inscription. The inscription is dated 1922. In March of that year, Marie J. Lauer (I have not been able to establish her biography), gave the book as a present to Nina, who, according to her bookplate was Nina Ranger Herzog, later Lilienthal (New York, 1898 - San Francisco, 1963). Apparently, this copy has been in the USA since the early 1920s, and perhaps even earlier.

There is another bookplate that probably identifies the first owner of the book.

This bookplate was owned by its designer, the artist Herbert Warrington Hogg (1862-1893). He was born in Folkestone, where he became an apprentice in a porcelain factory, and developed into a successful designer of forms. He moved to Bournemouth after a breakdown, married, and early 1893 a daughter was born.

His illustrations appeared in magazines, such as The Strand Magazine, The Gentlewoman, and The Studio. He also started a career as a book designer for John Lane who asked him to make drawings for the cover and the title page of William Watson's The Eloping Angels in 1893. It must have been one of his last works, as he died at the age of 31 in October 1893.

The Wilde book was published in 1891. Hogg may have met Ricketts and Shannon at an exhibition in London, or at the publisher's. But it is a puzzle. Had Warrington Hogg asked Ricketts and Shannon to sign the book? Why is there no dedication? Why is the form of Shannon's signature - with its long reversing tail - unusual? And why on earth would Hogg paste his large bookplate on one of the beautiful endpapers. These endpapers were specially designed for this edition by Ricketts. Hogg's example was followed later by the collector Nina Ranger Herzog...
Posted by Paul van Capelleveen at 12:30 AM