135. Ricketts in a Cathedral

When Eric Binnie published his book on The Theatrical Designs of Charles Ricketts in 1984, he listed three designs for The Coming of Christ by John Masefield, which was performed in Canterbury Cathedral on 28 and 29 May 1928: a costume for a Roman soldier (in the collection of the Victoria & Albert Museum), a design for Gaspar and one for an angel, both held by the Bell Estate, the executors of the Bishop Bell and Mrs Bell of Chichester.

George Bell (1883-1958) had married Henriette Livingstone in 1918, and was appointed Bishop of Chichester in 1929, but from 1925 to 1928 he had been Dean of Canterbury, which explains how he came into the possession of two of Ricketts's designs. He initiated the Canterbury Festival of the Arts, the first of which was the Masefield play in the summer of 1928, and the most famous one was T.S. Eliot's Murder in the Cathedral in June 1935.

Ricketts worked with colour schemes, as he recorded, and for The Coming of Christ he dressed Christ in white and red, the Virgin Mary in Gentian blue, the warriors in 'steel and blood', and the archangels in gold. The girl-angels were, like Mary, dressed in Gentian blue.


One of the costume designs has turned up for sale in London, where Chris Beetles Gallery offers it for £6,500.00. It is inscribed with the title (below the mount), and measures 12x12½ inches.

The 1928 performances by amateurs from Canterbury were well attended. A newspaper reported that beforehand 6,000 applications for tickets had been made (Dover Espress, 25 May 1928), as word was out that the play contained some revolutionary speeches. Indeed, some shepherds engaged in a debate of a communistic and atheist character. Masefield, confronted with protests, said: 'How do you expect shepherds to talk? I would have them talk something livelier than sheep' (Derby Daily Telegraph, 24 May 1928).

On both days, Whit Monday and Whit Tuesday, the play was performed before two audiences of 1,500 each, one in the late afternoon and one in the evening. A review was published in several newspapers, showing that the critic was in awe of the costume designs:

The rich colours of the costumes, blending effectively with the background of the choir screen, in front of the nave steps where the performance took place, made a magnificent spectacle. [...] The costumes, designed by Mr. Charles Ricketts, R.A., were made by Canterbury women, and the accessories by students at the Canterbury School of Art.'

Later, the play was performed by the Citizen House Players of Bath at the Wellington Town Hall (Monday 21 January 1929), using Ricketts's costumes. The music, as in the earlier performances, was by Gustav Holst. 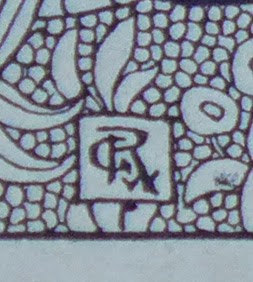 133. A painting attributed to Charles Shannon

On Saturday 8 February Thomaston Place Auction Galleries in Thomaston, Maine, sold carpets, paintings, statues and other antiques from local homes and from the Boston area. Among these was a small painting, attributed to Charles Shannon.

The scene was described as 'Fox Hunter Watering His Horses', and the miniature oil painting, measuring 7,6x10,4 cm, has an inscription on the back, attributing the painting to Shannon, whose signature CHS might be in the lower left corner on the front.


If the painting can be attributed to Shannon, it certainly is an early work, from the eighties or early nineties of the nineteenth century. At auction, there were some bidders in the room and others on the internet, and for the small oil a price of US$ 475 was realized.
Posted by Paul van Capelleveen at 12:30 AM

132. A Lithograph for The Burlington Magazine

Every now and then, The Burlington Magazine reproduced works of art of which the originals were for sale to the subscribers. In December 1906 Charles Shannon contributed an original lithograph, called 'The Morning Visit'.


The Lithographs of Charles Shannon, a catalogue compiled by Paul Delaney in 1978, lists this lithograph, which was issued separately, as number 68, and states that for the annual subscribers of The Burlington Magazine at least 110 copies were printed. These were issued in a blue paper wrapper. A copy in a private collection has the number 292, and we may assume that at least 300 copies were printed.


The reproduction in The Burlington Magazine (December 1906, p. [187]) was preceded by an introduction of C.J.H., Charles Holmes.

It is a commonplace of current criticism to speak of Mr. Shannon's painting as an echo of that of others, Whistler, Watts and Titian being the masters who perhaps are most generally assumed to be his artistic originals. [...] As times passes, however, the charges of imitation grow fainter, there is less and less inclination to label a painting by Shannon with another name than his, and the popular feeling about him is becoming the same as that which has long been held by those who have known his lithographs.
For a lithograph, like a drawing, is a more direct utterance of a man's self than anything which can be expressed in the more complicated and, even in the most skilful hands, more accidental medium of oil painting. Hence in his series of lithographs, which must now be about seventy in number, Mr. Shannon's personality shows more clearly, perhaps than in any other portion of his work, and this Morning Visit might almost be regarded as its embodiment. We see there an artist to whom instinct for design, for the airy spacing of the gestures of women and children, is the one thing of importance, to whom the inexpressive details and violent surprises of modern realism seem, if not precisely vulgar, at least alien to the temper in which great art is conceived. [...]
In Mr. Shannon's lithographs this fluent line is modified by the modern feeling for vibrant light; a feeling apparently not quite compatible with perfect use of the oil medium. Here then we have to recognise how marvellously belanced is this art which comprises such gracious amplitude of mass[,] such vital suppleness of contour, and such a charm of silvery atmosphere within its modest scope.

The lithograph depicts a female figure, with long unmade hair, lying on a bed, reaching for her baby that is held firmly by a nurse. Mother and child are naked, (the nurse is dressed), and a symbolism of purity seems intended. There is a curtain in the background.
Posted by Paul van Capelleveen at 12:30 AM