218. Wilde & Mallarmé (and Ricketts) at auction

The private library of Stéphane Mallarmé will be auctioned in Paris by Sotheby's on 15 October 2015. The collection contains his own copies of Le Corbeau (1875) and L'Après-midi d'un faune (1876), both with illustrations by Édouard Manet, and many other singular books and manuscripts including the manuscript of Un Coup de Dés jamais n'abolira le Hasard.

There are also two autograph letters by Oscar Wilde to Stéphane Mallarmé, written in February and November 1891 (Sotheby's dates both letters February 1891).

The description of the lot puts the later letter first (here dated mid February 1891). The letter accompanied a dedication copy of Oscar Wilde's novel The Picture of Dorian Gray with a cover design by Charles Ricketts. The dedication in the novel reads: 'A Stéphane Mallarmé. Hommage d'Oscar Wilde, Paris '91'. The copy of The Picture of Dorian Gray is not included in the sale.

On 10 November Mallarmé responded to this letter, thanking Wilde for his gift. Wilde could not have written his letter in mid February, because the book appeared in April of that year.

In the second letter, in reality the earlier one, Wilde thanks Mallarmé for the gift of a copy of Mallarmé's translation of Poe's poem Le Corbeau. Like all Mallarmé disciples and admirers, Wilde calls him 'Maître', the poem is a 'magnifique symphonie en prose'. This letter is dated 25 February 1891.

Two letters about an exchange of books between two literary masters - the estimate for these exceptional pieces is €6000-8000.

217. Charles Ricketts at the Curwen Press


The bibliography by Robin Phillips has been in the making since 1963, so for more than fifty years. It contains descriptions of the books that were printed at the Curwen Press, Plaistow, London, between 1919 and 1955. During that period Oliver Simon was associated with the press. Phillips is adding new data regularly, and the descriptions contain information on author, title, format, size, typeface, paper, illustration methods.

Troy, a poem by Humbert Wolfe (1885-1940), was published as the twelfth publication in Faber & Gwyer's series The Ariel Poems. It appeared in a regular edition in September 1928 (legal deposit date 24 September); a limited edition of 500 copies signed by the author appeared in November.

The print run of the ordinary edition is not mentioned in the bibliography, but must have been approximately 3000 copies. The poem was set in a 10 point Garamond italic (title and author's name in roman). The green outer wrapper was printed in black with the drawing of the Trojan horse. There were eight pages, sewn in the wrapper (145x122 mm).

The limited edition is bound in light blue wove paper covers, with the upper cover gold-blocked with author's name and title. Published in a larger format (219x143 mm), the booklet contained twelve pages (not including the endpapers). The Trojan horse appeared, not on its cover, but on page [3], printed in black on white. This edition was printed on English hand-made paper (there is no watermark).

Ricketts's second drawing was also a line-block, but printed in several colours: black, red, yellow, green, and blue. Some slight differences between the image in the two editions may have been the result of the softness of the deluxe paper, and of pressure. 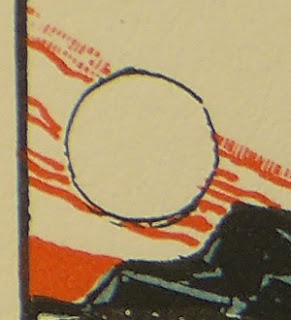 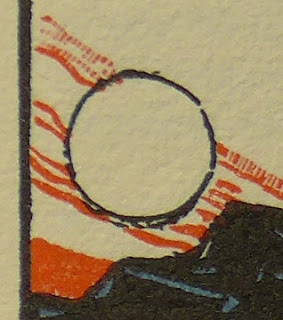 The pattern in red has, in some copies, been placed somewhat to the left, causing the red strokes around the moon to intrude the black circle from the right; in other copies they pierce the moon circle from the left; or don't enter the circle at all.

Another matter is the black in the woman's wrist. The seated woman with the naked back shows black ink in the copies of the deluxe edition, but not in the regular copies. 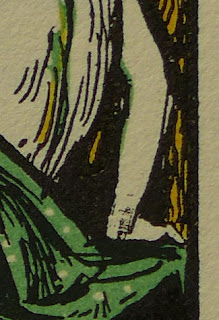 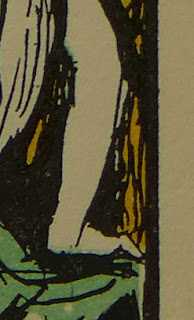 The former director of the Bibliothèque Sainte-Geneviève, Yves Peyré, has published a book about the bookbindings in the collection of this Parisian library, Histoire de la reliure de création (Éditions Faton, 2015).


When he was appointed director of the library, Peyré took note of the desiderata in its holdings. The historical collection was quite strong in bookbinding, but not in modern bookbindings. Peyré set out to collect modern French bookbindings from 1870 onwards, but, remarkably, he also acquired a more international collection of German, Dutch, Belgian, Danish, Italian and British bookbindings.

Among the latter are copies of books printed and designed by Lucien and Esther Pissarro, books bound by T.J. Cobden Sanderson, William Morris, and Charles Ricketts, whose design for Oscar Wilde's The Sphinx is called 'le sommet de sa carrière de relieur'. The short paragraph on his work states that Ricketts had a preference for vellum bindings with designs in gold. He designed only a few of those, in fact, Ricketts fancied cloth bindings with blind embossed designs.


The Bibliothèque Geneviève acquired a copy of The Sphinx in 2014. As a photograph shows, it is a far from immaculate copy. The spine is damaged, the covers are blemished and there are black stains, affecting the gold images. The catalogue description repeats an often made mistake: the initials 'LSH' on the back have been identified as 'Laurence Housman, interprète, Henry Leighton, relieur'. One often finds this double mistake in older antiquarian catalogues. 'LSH' stands for 'Leighton, Son, & Hodge', the London bookbinder's firm. The artist Housman, a good friend of Ricketts, had nothing to do with Ricketts's design.

It is a pleasure to note that French libraries display an interest in the book arts of other countries, and that lavish catalogues including foreign books are being published. I hope the Geneviève library will continue this acquisition policy and affirm its resolution to expand the collection with an international focus.
Posted by Paul van Capelleveen at 12:30 AM

215. An Attribution For Sale, and Sold

The auction of Fine Art, Antiques and Collectables by Gorringes in Lewis included a pastel and pencil drawing that was attributed to 'Charles Haslewood Shannon (1863-1937)'. The auction took place on 2 September.

The attribution is based on 'the title on the mount', according to the catalogue description, but there is no title, only an inscription: 'Charles H. Shannon R.A.'

The framed drawing is a portrait of an anonymous girl. The title given by the auction house is 'Study of a girl'. Measurements are 13.5 x 10.75 inches, which must be the dimensions of the frame as the drawing has not been taken out of the frame to check the attribution, or the state of the drawing.

(Thanks to Steven Halliwell).
Posted by Paul van Capelleveen at 12:30 AM

214. A Summer Miscellany: Choosing a Mask

The Leamington Spa Art Gallery & Museum in the Midlands owns a painting by Charles Shannon, a portrait of Ricketts: 'The Man with the Greek Vase' (1916), formerly in the collection of Mrs. Edmund Davis.

The museum's collection also holds another painting that was given in 1954. This is not a well-known painting, and probably an early one, by Charles Ricketts. This is called 'Choosing a Mask'. It was bequeathed to the museum in 1954 by Cecil French.

The oil on canvas painting is not dated, measures 43 x 38 cm, and depicts a figure in an interior. The catalogue's description is: 'A naked man is sitting and trying on a mask with his back to the viewer. There are many other masks on the wall in front of him'.

Ricketts started painting around 1900, copying the darkness of Renaissance masters, and these early paintings are by now extremely darkened (they were thus in the 1930s). But this painting is not darkened, and the tone is lighter, and more colourful; it might date from a somewhat later date.

There is a red chalk sketch for this painting in the Tullie House Museum and Art Gallery in Carlisle, along with two pencil drawings. A fourth preparatory sketch is in an album with proofs and drawings. As the other drawings in this album are all of early works by Ricketts, it is perhaps not unreasonable to suggest that this painting was of around 1905. It is suggested that it was the first painting by Ricketts that was exhibited.
Posted by Paul van Capelleveen at 12:11 PM