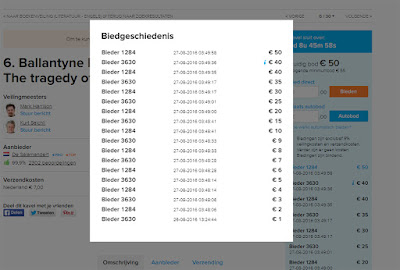 265. A Wilde Book from the Woodring Collection

The Carl Woodring collection is at the Fondren Library, Rice University, Houston, TX, and contains his excellent collection of Ricketts and Shannon material. A photo of his copy of Oscar Wilde's Poems (1891) was published online.

The 'What's in Woodson'  blog that  highlights new and interesting collections, records, memorabilia, and rare books located at the Woodson Research Center, Fondren Library,  wrote about the collection.

The lower right corner of the front cover has been bumped, and the spine at the top seems to have been damaged as well. Good copies of this binding have survived, but they are quite rare. The colour is vulnerable to light, the corners are fragile, the gold may darken or disappear.

264. A Commemorative Exhibition of Charles Ricketts

As I announced in May (blog 250), we will publish a small book about Ricketts's mother written by J.G.P. Delaney and Corine Verney: Charles Ricketts's Mysterious Mother. The date of publication for this moving and surprising story is 1 October 2016. That day, we will celebrate Ricketts's birthday, 150 years ago, on 2 October 1866.

The same day, the Museum of the Book (Museum Meermanno) in The Hague will be the venue for the opening of a small exhibition about Charles Ricketts as an illustrator of the Parables and of the poems in prose of Oscar Wilde.

In November 1895 a first issue of the new magazine The Pageant was published. Apart from a limited edition (large paper format, 150 copies), there was an ordinary edition. The books were not issued in a dust-wrapper (as far as we know).

However, a year later, the ordinary copies of the second issue for 1897 were provided with a remarkable dust-jacket. It has been the subject for an earlier blog: 77. A Paper Wrapper for A Pageant.

In his new book on dust-jackets, Mark R. Godburn doesn't mention this dust-jacket, and he doesn't mention other dust-jackets printed in colour before 1900. G. Thomas Tanselle, in his Book-Jackets, Their History, Forms and Use (2011) had selected this dust-jacket for a comment on the name of the designer. He argued that it was uncommon to mention the name of the designer of the jacket in the book, and that up till then, there had been no reason to mention names of designers, as the jackets did not bear traces of the work of a designer: ‘Nineteenth-century jackets are not normally associated with specific designers (understandably, given their generally sparse layout), but sometimes the designer can be identified: for example, The Pageant of 1897 (published by Henry & Co. of London) notes on the leaf following the title-leaf, “The outer wrapper is designed by Gleeson White.”' (p. 57).

Godburn and Tanselle do not single out the dust-jacket for its remarkable coloured design. Most illustrated dust-jacket before this one, had an illustration from the book printed in black on the front, and sometimes the paper wrapper itself was of a coloured paper.

In this case of The Pageant, the design had been printed in red, white and green on brown paper, after a design by Gleeson White. A note to the Foreword attested to this. The wrapper had been printed by Edmund Evans, as the foreword itself noticed. Evans (1826-1905) was the foremost colour printer of the latter half of the nineteenth century, working with Walter Crane, Kate Greenaway and Randolph Caldecott.

By 1896/1897, when the jacket for The Pageant was being produced, he had retired, leaving the company to his sons, and moved to the Isle of Wight, but he continued to work together with some artists, making wood-engravings for their work. There is no mark of the engraver on the dust-jacket of The Pageant.


Parts of the dust-jacket were cut out to show the title and author's name. This was regular practice in bookshops. The binding was (largely) protected, and the green cloth was not affected by light, and still the buyers could easily recognize the book.

Examples of torn and cut jackets can be found in Mark R. Godburn's recent book Nineteenth-Century Dust-Jackets (2016) (see pp. 118-121). In some cases jackets were torn in the bindery to assist packing of multi volume sets of books, in other cases it was done by sales assistants.


The jacket for the second series of poems by De Tabley is an example of the second type, that was cut in the shop. A copy is now in a private collection.