322. Numbers and Letters for Gordon Bottomley


As customary with deluxe editions, the limitation statement only appeared in the deluxe copies. The ordinary copies in red buckram mentioned the binding design and the copyright statement.

Of this edition have been issued fifty numbered copies for sale, and ten (lettered A-J) not for sale. No.


Bottomley numbered and signed the copies in brown ink, and he (or his publisher) added a line of dots on which Bottomley (or the publisher) placed the written number (the dots were not printed).

The ten lettered copies were individually lettered on the press.

On Hellespont, guilty of true love's blood,
In view and opposite two cities stood,
Seaborderes, disjoined by Neptune's might;
The one Abydos, the other Sestos hight.

In June 1894, the Bodley Head in London published an edition of Christopher Marlowe's and George Chapman's poem Hero and Leander. The book contained 7 wood-engravings, a border, and seven decorated initials.


The initials depict leaves and stems of laurel, one of Ricketts's favourite design elements; he used it for several borders. The larger ones have a peculiar propeller pattern, especially the 'N' and 'O'. 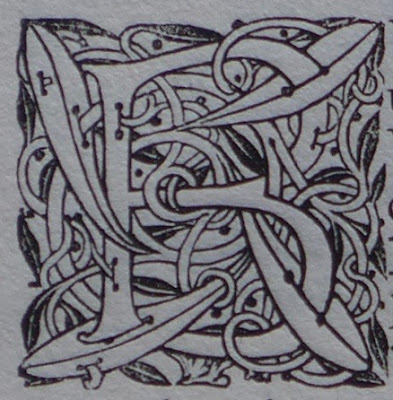 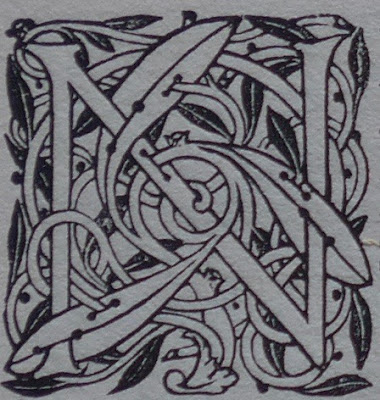 The 'O' is the first one to appear in the book, and the small black leaves are not very different from those in the smaller initial 'C'. However, the larger, white leaves form a centrifugal pattern, suggesting rotation, referring to whirling waters, the waves that will form the graves of Leander and Hero in this version of the poem.
Posted by Paul van Capelleveen at 12:30 AM

N is for Noli me tangere.

And graven with diamonds in letters plain,
There is written her fair neck, round about;
Noli me tangere; for CAESAR's I am,
And wild for to hold though I seem tame.

The initial 'N' appears in the 13th line of the sonnet by Thomas Wyatt, spelled Wyat by Ricketts in his rendering of the text for The Magazine of Art of September 1892. His calligraphy of the poem accompanied a large illustration, showing Anne Boleyn in The Tower of London before her execution.


The sonnet is said to have been written by Thomas Wyatt (1503-1542) for Anne Boleyn (1501?-1536). The phrase 'Noli ne tangere', meaning, Don't touch me, being a biblical reference, can also be read in association with King Henry VIII, whose deer one was not allowed to hunt. Wyatt compares his beloved to a hind, because although one can love the deer, the deer will not be aware of one's love for it. Best to give up.

The important message - don't touch the lady - appears only in the last lines of the poem, but Ricketts added the phrase to the initial at the beginning of the poem.

The original drawing is in the collection of the William Andrew Clark Memorial Library, Los Angeles, a gift of the Ricketts collector Albert Sperisen (1908-1999).
Posted by Paul van Capelleveen at 12:30 AM 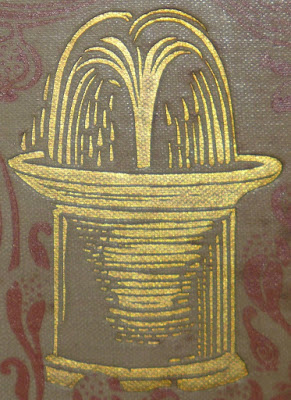