Julia Köllner, in her thesis on the representation of Danaë (see blog No. 190), argues that the depiction of Danaë is as varied as can be, but that there is one constant image that allows viewers to recognize her, which is a golden rain streaming down into a woman's womb. This image identifies such a female figure as Danaë.

In her thesis, Köllner wishes to establish the common factor in the representation of Danaë, independent of the medium (text, painting, wood engraving, drawing etc.), and her research indicates that the myth of Danaë has survived thanks to its successful imagery, especially that of the golden rain, that has lent itself to contradictory interpretations in subsequent periods of western art and literature. The imagery served different masters: it helped to form a view of morality and virtue, or could masque the enjoyment of erotic pleasures. Furthermore, Köllner argues that the change of golden rain into golden coins, established another interpretation, based on trade, whereby both Zeus and Danaë exchanged 'goods', or gold for a child. That may be true, the Ricketts images, however, do not really support the last thesis, as both Sturge Moore and Ricketts who illustrated his friend's poem, held on to the image of the golden rain or golden light.

In some images of Danaë a parallel has been established between Danaë and Maria, or the Madonna in Christian art. Ricketts also alludes to the Madonna in his second illustration.

Köllner points out that the allusion to Maria is put into the right hand lower corner where a flower pot contains a lily, symbol of the annunciation (archangel Michael wearing a lily) and purity.

In Sturge Moore's poem, the lily is mentioned almost at the beginning, as a flower that grows, 'deep-delled and fragile', but 'very stilly', just like Danaë who is growing up unseen in her brass tower. Moore's lines sensuously describe her changing contours, as she becomes a teenager.


Posted by Paul van Capelleveen at 1:14 AM

The representation of Danaë in art was the subject of a thesis by Julia Köllner (University of Vienna, 2013). The text is in open access under the title La Danae tra testualità e rappresentazione. It deals (according to its synopsis) 'with the myth of Danae in texts and images, with a focus on the Italian production', starting with an inventory of representations of Danaë, followed by an analysis, that is, 'a communicational concept'.

Ricketts's illustrations for Thomas Sturge Moore's poem are listed as IMM 54 to IMM 56, and some details are discussed.


Danaë was the daughter of Acrisius, who was told by an oracle that he would be killed by his daughter's son. To prevent this, he enclosed her in a bronze tower or cave. However, Zeus came to her in the form of golden rain, and she gave birth to a son, Perseus. Mother and son were cast into the sea, in a wooden chest, but they survived, and washed ashore of an island that was ruled by Seriphos. Danaë declined the love of king Seriphos, and when Perseus had grown up, in order to prevent a forced marriage between his mother and the king, Perseus was tasked with bringing him the head of Medusa.

Köllner's first illustration by Ricketts (IMM 54) depicts Danaë in her prison cell, standing on a flight of stairs, and staring out of a small latticed window. Köllner points at a vanitas symbol: 'uno specchio decorato con piumo di pavone. Immagine riflessa del suo volto visibile nello specchio'. The mirror is above the bed, positioned between two long curtains. A peacock's tail is attached to the mirror that reflects Danaë's face.


Other features that are mentioned are a pair of slippers, a pillow, and metal walls. The image symbolizes, according to Köllner, lust and desire.

These illustrations by Ricketts have not been the subject of an in-depth study yet, however, in his 1988 work Five Centuries of English Book Illustration Edward Hodnett wrote about the wood engravings in some detail: 'They record moments during Danaë's immurement in a tower of brass [...]. The designs convey poignantly the claustrophobic effect of Danaë's imprisonment and the melancholy of Moore's lang[u]orous verse. The first engraving, familiar from reproductions, shows the lonely girl kissing her reflection - "In polisht walls a sister found is kissed." In the second, her lover Zeus visits her as a shower of gold - "She kneels in awe beholding lavish light." Danaë kneeling and holding her head suggests pain rather than awe. In the third design, Danaë stands on portable steps to look out [of] a small round barred window - "Danaë at her twilit latice ponders." In this series of three illustrations, the third one of Danaë alone in her small room seems repetitious, particularly since a few pages later comes the most graphic event in the poem and in Danaë's part of the myth: Danaë and her baby (Perseus) being set adrift at sea in a chest.' (p. 211)

Hodnett is critical of Ricketts's illustration 'Danaë at het twilit lattice ponders'. In comparison to Köllner's listing, some points should be made.

Firstly, Hodnett compares the illustrations in connection with the text of the poem, which Köllner does not do. This allows him to remark that an important dramatic scene in the poem has not been illustrated by Ricketts.

Secondly, Hodnett has actually seen the book, while Köllner took her images from the British Museum website. Not only the relation between text and image is lost, even the order of the images has been confused. Köllner's first Ricketts image (IMM 54) is the last one in the book, and Köllner's last image comes first in the book. The use of a database for research on book illustration is not without its dangers, and even if one does not have access to the printed book itself (the book, however, is mentioned in the bibliography of this thesis), an e-version is readily available on the website of the Internet Archive.

[To be continued.]
Posted by Paul van Capelleveen at 12:47 AM 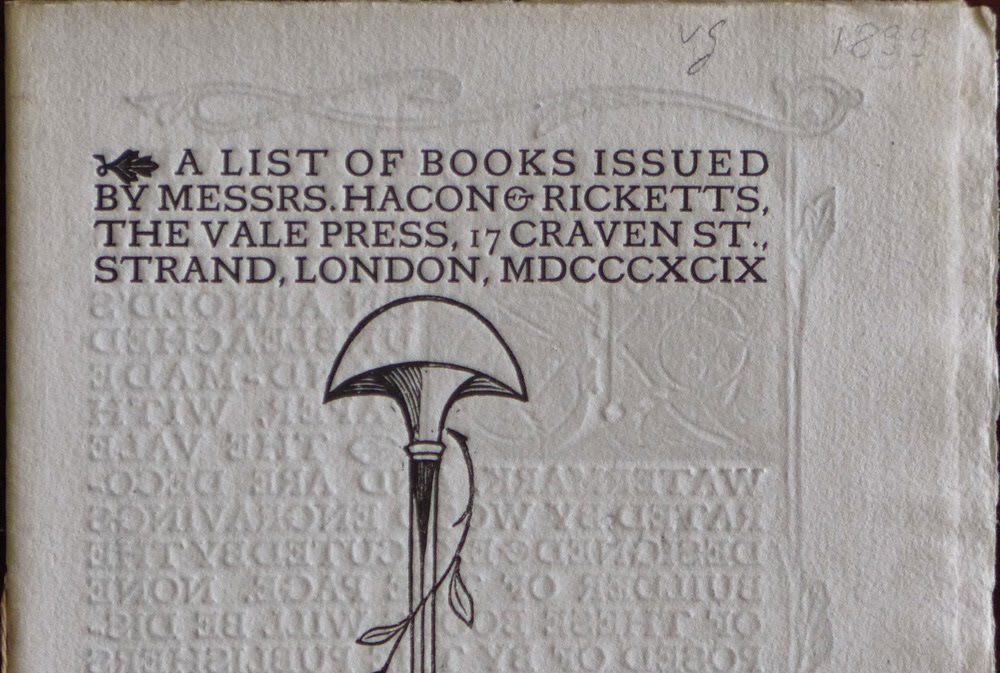 The YouTube channel has always included advertisements. Recently, an entry on Maureen Watry's book on The Vale Press has been published on YouTube on 3 February 2015 as Synopsis: The Vale Press.

The 'film' is not a film at all; it consists of two 'stills', quoting the blurb (the text on the dust wrapper) and showing an image of the front cover. That is all. The internet keeps amazing us.

It is 'published' by 'Heavy truck', which seems to be related to 'Justasummary', and that is a website under construction... Etcetera, etcetera. The maddening labyrinth of commerce.
Posted by Paul van Capelleveen at 12:30 AM