H. Henry & Company in London were the publishers of The Pageant, a luxury year book that was edited by Charles Shannon and Gleeson White, while the covers were designed by Charles Ricketts, endpapers were drawn by Selwyn Image, and many other artists' and authors' names adorned the large and regular advertisements that invited sales. After two volumes, the series was discontinued.

However, Henry & Co were adamant to succeed, and had many other projects going on. One of them was a magazine called The Children of the Hour, subtitled A Paper for the Few. A prospectus was issued on 15 December 1896, and two copies have survived in the John Johnson Collection at the Bodleian Library.


The magazine never reached an audience; there were, perhaps, too few people who wanted it.

The list of contributors is long and represents almost everyone from the 1890s - except, of course, Oscar Wilde, and Aubrey Beardsley. The others were said to become contributors, such as Max Beerbohm, Charles Condor, Ernest Dowson, John Gray, Herbert Horne, Selwyn Image, Lionel Johnson, Richard Le Gallienne, Maurice Maeterlinck, G.B. Shaw - even Thomas Hardy was mentioned as a possible contributor.

The list also includes Charles Ricketts and Gleeson White - the name of the art editor of The Pageant, Charles Shannon, doesn't figure in the prospectus.

The Pall Mall Gazette published an interview with the editor who assured that the subscription wouldn't be cheap, and the magazine would 'revive the art of the light essay'.

In the Daily News (14 December 1896), the editor remained vague about the date of publication of the new paper, there might be two or three issues a week. Apparently, the first issue never appeared, although advertisements quoted from the Globe: 'It is extremely small, it is written with the utmost care, and it is less concerned with affairs than with culture'. Sounds like a spoof.

The British Library also owns a copy of the prospectus.

In April 1897 advertisements still announced a first issue, stating that a 'Preliminary Number' would be sent on request (The Pall Mall Gazette, 3 April 1897). The real magazine never materialised.
Postscript, 30 October 2022:
In a letter to Michael Field, written in November 1898, Ricketts wrote that he had no intention to write an article for the proposed magazine.
Posted by Paul van Capelleveen at 12:30 AM

One of the enigmas of Vale Press books is the page number on page v of The Passionate Pilgrim. The book contains poems by Shakespeare accompanied by songs from his plays.

There is a roman numeral 'v' inserted within a decorative half border in the lower left hand corner of the first text page.


All of the pages in this edition have roman numerals set in Vale Press type, but not page v. The letter 'v' on this page is smaller than the others, probably because the opening in the plate for the decoration didn't allow for a larger type, although the difference is small.

As the book was printed on a specially reserved Albion hand press at the Ballantyne Press in London, the compositor could easily have loaned a small size 'v' from one of his colleagues in the compositor's room of the large printing firm. For the other books, he had at his disposal Vale Press type that came in only one size, a 13 point letter. The Vale Type specimen doesn't contain numerals (see Watry's bibliography, page 38), nor do the other two typefaces that were designed by Ricketts, the Avon Fount (11 point) and the King's Fount.

However, numerals were used for the page numbers in several books, such as the two-volume edition of  The Rowley Poems of Thomas Chatterton (1898).


These numerals have not been identified yet, nor has the small letter 'v' on page v of the VP Shakespeare edition that was issued years before Ricketts decided to design his second and smaller typeface, the Avon Fount.

Frequently, when called for, Ricketts designed new decorations and initials for his books, but numerals and page numbers were, apparently, not that important to him, and were not seen as part of the design that he wanted to control. That's another enigma: why didn't he design numerals?
Posted by Paul van Capelleveen at 12:30 AM

U is for Unless.

Unless one is wealthy there is no use in being a charming fellow.

This sentence is the opening line of the last story in Oscar Wilde's Lord Arthur Savile's Crime & Other Stories (1891). The cover and spine designs are by Charles Ricketts, who, especially for this book produced a variant on the publisher's mark for James R. Osgood, McIlvaine and Co, as he did for all the new works that he designed for this firm during the early 1890s.

The book was printed by R. & R. Clark in Edinburgh, but it displayed all the asymmetrical and whimsical typographical features of a book printed at the Ballantyne Press where James McNeill Whistler had influenced page design for several years and where Ricketts had his magazine The Dial printed, emulating Whistler's idiosyncrasies and adding his own.

Ricketts might have been responsible for the illustrated initials that appear on the first page of each story: an 'I' (page 3) accompanied by a pair of wings, an 'O' with an acorn and two leaves of what appear to be lathyrus (page 77), a 'W' adorned with two violets (page 91), and finally a 'U' illustrating two small oak leaves (page 157).

No contract for the book has survived, Wilde's letters do not mention the initials, we can't be sure whose design they are. However, I have never seen them in any other book; the style is unlike that of other Clark books, we have seen Ricketts draw more designs for a book than he was commissioned (certainly in the case of Wilde's books - for this book he not only drew the publisher's mark but also a smaller variant one), and the initials are subtle, diverse, and seem to symbolize the story they precede. On the other hand, the letters themselves are not like the art nouveau creations Ricketts displayed on the cover of, for example, Wilde's Poems, although the various positions of the two illustrated elements around the initials are harmonious, yet sophisticated and funny. 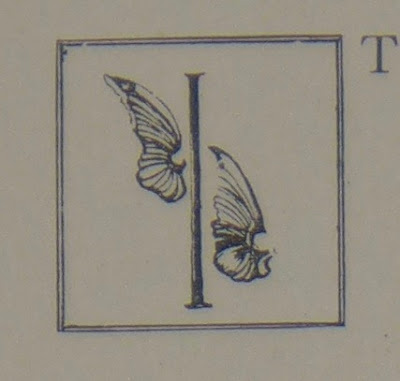 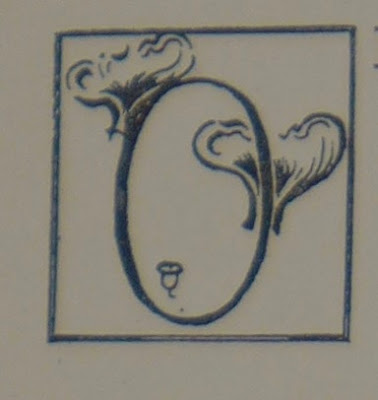 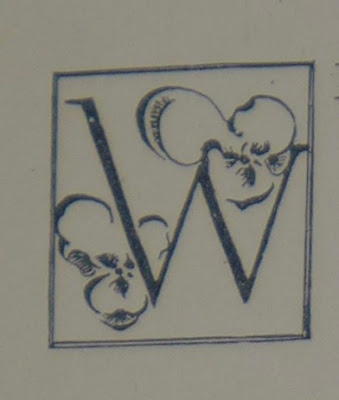 Although the designer of these initials remains unknown, I have always thought that Ricketts might have been their inventor.

The book was produced to reach a larger audience, and was lowly priced at 2s, and Guy and Small (in Oscar Wilde's Profession, 2000, page 232) argue that this was the reason for the lack of illustrations. This might indicate also that the initials were stock initials used for magazines and such, but, again, they look too subtle and new for that and were not used for Wilde's stories when they first appeared in periodicals. As new illustrations were deemed to be expensive, Ricketts might have stepped in to help solve the space problem, that is: the book needed more pages, and the stories were subdivided into chapters, additional title pages were included with subtitles for each of the stories. The initials might have been introduced at that phase of the editorial process.

Anyway, they are there now for us to enjoy.
Posted by Paul van Capelleveen at 12:30 AM

Moving house for the first time since I started this blog, seems a good occasion to quote Paul Delaney on Ricketts and Shannon's relocation to Townshend House in 1922 - hoping he, and my readers, will allow me this lazy blog.

In 1922, Shannon's career as a lithographer and painter was stagnating, while Ricketts's work as a theatre designer was admired by writers, designers, audiences, and critics alike.

Shannon, as a result of his feeling of stagnation, latched on to the idea of moving house as a change and 'a sort of renewal of life grown into a monotony of habits'. Ricketts, as usual, took the opposite view, dreading the effort and uncertainty and confessing 'to moments of acute depression and fear of the future which is not good for anyone'. He was, he claimed, 'of a cat-like disposition, deeply attached to places, which I generally like better than people'. However, a move was necessary. Their twenty-one-year-old lease for the Lansdowne House flat was running out and Davis [the owner] had decided to sell the building.


Faced with the probability of a considerable rise in rent, they decided to buy a place of their own where they and their collections would be secure for the rest of their lives, and even Ricketts looked forward 'to the excitement of recasting and remoulding our "ambience" and the satisfaction of actual ownership to put an end to a deep indwelling sense of regret'. It was not easy to find a house to accommodate them, their two studios, and their large collection, at a price they could afford: 'Palaces are cheap, not so the smaller houses', they discovered, though the sort of smaller house they were seeking would seem more like a palace today. A month was spent house-hunting, and interviewing property agents and lawyers, before 'the possible and desirable place' was found. This required an outlay which intimidated Shannon, and they rushed to see their lawyer over mortgage and cash questions with the fear that it might be snapped up by someone else.
[J.G. Paul Delaney, Charles Ricketts. A Biography. Oxford, Clarendon Press, 1990, pp. 331-332.]

On May 1923 they found themselves in their new home, Townshend House, a large Edwardian villa (since demolished) near Regents Park. Not a thing in the new house worked, not a window, tap, lock, stove, or geyser, Ricketts claimed, though they had been paid for weeks and months before; the painters had bolted before finishing the job, leaving their paint pots behind - Ricketts was clearly over-reacting as usual. As soon as the stove in the dining-room was working, they made that their headquarters, as the weather was wet and wintry.
[Ibid, p. 333.]
Posted by Paul van Capelleveen at 12:30 AM