400. A Wildean Daphnis and Chloe

Blogpost number 400 is guest written, on my invitation, by the eminent scholar Dr. Rebecca N. Mitchell of Birmingham University, Department of English Literature, where she is reader in Victorian Literature and Culture and Head of Research of the School of English, Drama, American and Canadian Studies.

Her research interests reflect her 'interdisciplinary background in literary studies and art history'. Her latest book, co-written with Joseph Bristow, contained notes on the Vale Press edition of The Rowley Poems, and was published by Yale University Press: Oscar Wilde's Chatterton: Literary History, Romanticism, and the Art of Forgery (2015). Mitchell, Bristow, along with Yvonne Ivory, will edit the final volumes of the Complete Works of Oscar Wilde for Oxford University Press.

A recent essay including comments on the designs of Ricketts and Shannon was published in The Papers of the Bibliographical Society of America, 112 (2018): 'The Century Guild Hobby Horse: Crafting Generic Networks in Fin de Siècle England'.

It is both an honour and a delight to publish her contribution on Daphnis and Chloe as a very special, celebratory blogpost.


A Wildean Daphnis and Chloe


The many lines of direct influence between Oscar Wilde, Charles Ricketts, and Charles Shannon are well documented in this blog and in the critical and biographical literature. Most prominent are the commissions: the Ricketts-designed edition of Wilde's The Sphinx (1894), the Ricketts-painted portrait of 'Mr. W. H.' in the style of a Clouet, and Shannon's designs for the bindings of Wilde's Society plays were produced in response to the author's requests. But there are other, less obvious patterns of influence that also illuminate the relationships between the author, artists, and their audience. As Joseph Bristow and I have documented, in February 1895, on the very night that the Marquess of Queensberry left the accusatory calling card that would precipitate Wilde's doomed libel lawsuit against his lover's father, Wilde stopped by Ricketts and Shannon's home and encouraged them to produce a volume of Thomas Chatterton's poems for their Vale Press (see note 1). They seem to have followed through on his advice, as their glorious two-volume edition of The Rowley Poems was published in 1898.

Ricketts and Shannon returned the favour of inspiration, planting a seed for a later work of Wilde's with their edition of Longus's Daphnis and Chloe printed in 1893 by the Ballantyne Press on behalf of the Vale, a still-nascent operation. Ricketts supplied a pithy plot summary of Longus's story in a letter to Cecil Lewis in 1920: 'Two foundlings brought up by shepherds fall in love, but, like the Young Lady of Slough, they found they didn't know how.' A few lines later, Ricketts concludes that 'The story is curiously silly, corrupt, fresh, and exquisite.' (see note 2). That mix of characteristics appealed to a number of fin-de-siècle writers and artists: the hapless young lovers stumble through a number of erotic (and homoerotic) sexual encounters, all with the plausible deniability of ignorance. Before the Ricketts and Shannon edition was produced, David Nutt offered an edition in his 'Tudor Library Series' in 1890, and Henry Vizetelly's translation from the Greek appeared in the same year, with illustrations based on eighteenth-century antecedents. Though never one to shy away from scandal, Vizetelly was careful to note in his Preface that 'the language of Longus [had] in certain instances, been very considerably chastened.' 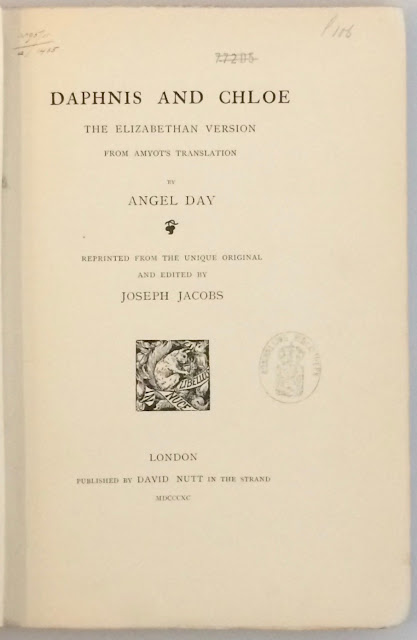 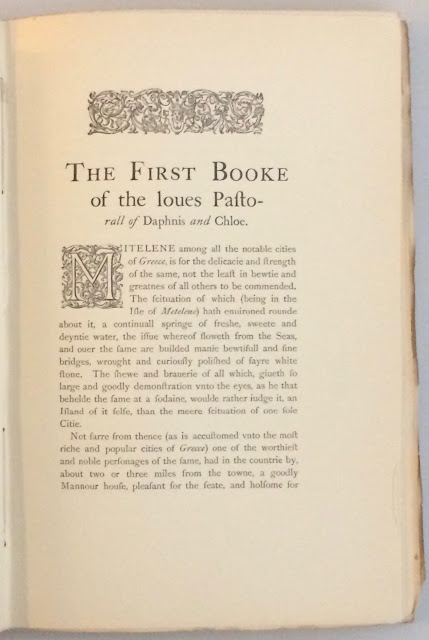 The market was thus newly primed to Longus's story, and welcomed Ricketts and Shannon's illustrated edition; critical response was uniformly positive. Remarking on the Daphnis and Chloe woodcuts in a 1903 exhibition, a reviewer gushed that the volume was: 'an extraordinary production for the present age, not unworthy of being considered beside the cuts in "Poliphilus" and other Italian book-illustration of the great period.' (see note 3).  Another critic described the unified style of Ricketts and Shannon's efforts in Daphnis and Chloe with real sensitivity: 'In research for linear rhythm and logical design, in a disposition of figures that is at times so deliberate as to obtrude deliberation on one's notice, and in the choice of darkened light as the envelope, these two artists are as one.' (see note 4). It is a comment that raises another valence of meaning: the co-production of the edition, produced by a pair who were partners in life as well as art. The final printer's page indicates that 'The Woodcuts drawn on the wood by Charles Ricketts from the Designs by Charles Shannon and Charles Ricketts have been engraved by both,' though the printed book does not distinguish which scenes are by which artist (see note 5). As Paul van Capelleveen has shown in an earlier post in this blog, the work was self-referential in other ways, with Ricketts, Shannon, Sturge Moore, and Lucien Pissarro all seated at the banquet table in a two-page illustration of the Wedding Feast. As a site of mutual collaborative creativity, Daphnis and Chloe chimed with others in their circle and beyond.

Perhaps it was this positive model of collaboration that inspired Oscar Wilde to take up Daphnis and Chloe himself. After his release from Reading Prison, Wilde left England for the continent, settling in Berneval-sur-Mer in late May, 1897. There, he wrote to friends that he expected a visit from Ricketts and Shannon in September (see note 6). It is unclear if he was visited by the duo (though Ricketts later remembered they didn't meet each other after Wilde had been released from prison, see note 7), but in August Wilde did entertain artist and composer Dalhousie Young, whom he had met in person earlier that summer. Wilde devised a plan to collaborate with Lord Alfred Douglas and Young on an operatic setting of Daphnis and Chloe, some four years after the Vale produced its seminal version of the story. Wilde's correspondence suggests that he and Douglas were to share the responsibility for the lyrics and that some work, at least, was completed on the project. Whatever Wilde's artistic intention, he managed to leverage the promise of collaboration (his and Bosie's; theirs and Young's) on Longus's story for a much needed £100 courtesy of the composer, procured only after a series of strained letters that evince equal parts genuine interest and desperation. After those letters, the trail on the Wilde/Douglas/Young collaboration goes cold. Unlike Ricketts and Shannon, Wilde and Douglas were never to see their joint efforts on Daphnis and Chloe through to completion.

The tantalizing suggestion that the pair had undertaken much work is belied by Wilde's tendency in those years to exaggerate his progress as a way of subsidizing his increasingly dire finances (see note 8). Still, intrigued by the promise of existent work from Wilde's final years, in 1935 the radio performer and director and ardent Wilde fan Léon Guillot de Saix contacted still-living members of Wilde's circle for any information that might inform his biography of the author. Guillot de Saix's letters are held in the Richelieu branch of the Bibliothèque Nationale de France, and among them is correspondence from Young's widow. Edith Young's response puts an end to speculation that Wilde and Douglas ever sent Dalhousie Young draft content for a libretto. Though she remembers visits with Wilde, 'Nothing ever came of' the Daphnis and Chloe project, she writes; 'I think Wilde got tired of the idea.' (see note 9).

I would like to thank Leonie Sturge-Moore for permission to reproduce the Daphnis and Chloe proofs by Ricketts, and the William Andrews Clark Memorial Library for their generous consideration. Some content from this post was presented at the May 2018 'Curiosity and Desire in Fin-de-Siècle Art and Literature' Conference at the Clark, hosted by the International Walter Pater Society, and I am grateful to the hosts and the audience for their support and feedback.


Note by Paul van Capelleveen
I was curious when the self-referential character of Daphnis and Chloe, in particular the wood-engraving of the banquet scene that includes portraits of the Vale Press artists, was mentioned for the first time. It turns out that it was referred to, very early, in 1896, as part of a much-needed advertising campaign for the Vale Press.

Temple Scott published an interview with Ricketts in Bookselling (December 1896), 'Mr. Charles Ricketts and the Vale Press’, and in the accompanying bibliography Scott's description of the book was obviously based on Ricketts's clarifications. He wrote that there were thirty-six wood-engravings, 'counting a double page on pp. 96-97 as one', and he added: 'This double-page engraving contains portraits of the wood-engravers of the Vale set.'