The book's colophon doesn't mention the binding design or material. The edition (there were 220 copies of which 200 were for sale) was bound in vellum with a gilt-stamped design, which was signed 'CR' [for Ricketts] and HL [for the binder, Leighton, Son & Hodge].

An early bibliographer mentioned a separate edition of ten copies that were bound otherwise. Temple Scott (1864-1939) interviewed Ricketts, and published 'A Bibliography of the Books Issued by the Vale Press' in Bookselling (December 1896). According to his list: 'Ten copies were bound with the design in blind, the others have the design in gold.'

Three years later Ricketts, in his book A Defence of the Revival of Printing (1899), wrote: 'Six copies exist bound as originally intended in blind tooling and gold'.

Ricketts's remark led to confusion. Copies in vellum were thought to be exceedingly scarce, but they are not; all copies had been bound in vellum, the difference being the decoration. There are copies with the design printed in gold, but there are no copies with a blind-stamped design. There are some hybrid copies: they have most of the design blind-stamped, and only a few dots and circles in gold. These appear on the front and back of the binding. The spine of those copies has the title in gold as well.

The question is: how many of these hybrid copies are in existence? Six (Ricketts) or ten (Scott)? My guess is that Scott was right. 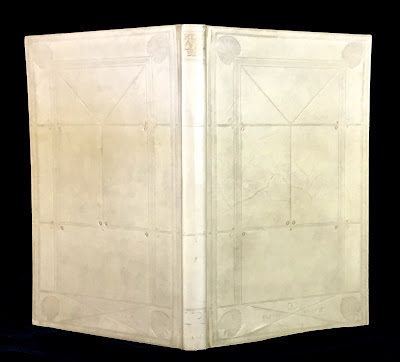 An agreement between Ricketts and Shannon and the Bodley Head was signed on 5 February 1894, shortly followed by the announcement stating the name of the binding design 'Pearl and Thread'. It is a fine linear design with leaves, dots, circles, lines and triple lines - the kind of drawing that he would repeat many times for the special bindings of Vale Press books, and also for commercial bindings. But why 'Pearl and Thread'? Are the small circles to be seen as 'pearls' and the thin lines as 'thread'? The spine design contains two lines in a V-shape; they come together, and end in a small leaflike ornament that could be seen as a pearl. Perhaps this is due to the obscure subtlety that Ricketts loved.

Perhaps, Ricketts had wanted this design at first, the 'Pearl and Thread' design, blind-stamped on vellum with only dots and circles in gold. And, perhaps, the Bodley Head didn't like this much. The publishers may have insisted upon a more luxurious binding design, and subsequently the entire design was executed in gold. The bindings that were gilded and blind-stamped can be divided into two categories: copies destined for the copyright libraries (Oxford, Cambridge), and personal copies for Ricketts and Shannon.

Where are these copies? In general, library catalogues do not include illustrations of the bindings, or annotations that make it possible to distinguish the two binding editions.

There may be more copies. So far I have traced six copies that are partially blind-stamped and gilded.