294. An Early Drawing: Those Servants Again

At Dominic Winters Auctions, on 2 March, an early drawing by Charles Ricketts was sold for £620. The drawing was signed 'C. Ricketts'. There is an inscription on the back, probably intended as a caption to the illustration: 'Those Servants Again'. 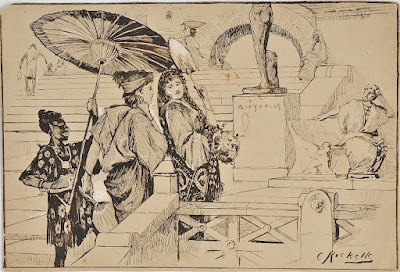 The caption reads in full:

First fair Patrician
- Positively refused to fight in the arena, my dear, and that sweet nubian lion doing nothing. What are we coming to next. For not one of them has been thrown into the Lamprey pond, since Old Pollux.
2nd fair Patrician
- Ah! Slaves are not as they were.

Old Pollux and the lamprey pond refer to Vedius Pollo (died 15 BC), a Roman of some authority in the Roman province of Asia. He was known for his cruelty to slaves. He would punish them by feeding them to his lampreys that were especially kept for the purpose. Seneca wrote down what happened to Vedius when the emperor Augustus visited his house (On Anger, III, 40):

He [Vedius] ordered him to be thrown to the huge lampreys which he had in his fish pond. Who would not think he did this for display? Yet it was out of cruelty. The boy slipped from the captor's hands and fled to Augustus' feet asking nothing else other than a different way to die – he did not want to be eaten. Augustus was moved by the novelty of the cruelty and ordered him to be released, all the crystal cups to be broken before his eyes, and the fish pond to be filled in...

The literary reference had a certain actuality attached to it, as it could be read as a modern complaint about domestic servants.

The cartoon has never been published. For the early published drawings by Ricketts all originals seem to have disappeared, part of the process possibly, as the they were considered to be sketches that were engraved on the block by artisans in the publisher's studio. The survival of this (hitherto unrecorded) drawing itself suggests that it was never published.

The signature, with Ricketts full name and the backward pointing stroke of the 's', was used by the artist for his early drawings (after 1885; the earliest drawings have not been signed at all). The stroke of the 's' varied in length, sometimes approaching the first 't', often even underlining the 'k'. Drawings by Ricketts, having this signature, were published in Cassell's series History of England in 1887 and 1888. Some of these drawings must have been made in 1886; these were all realistic, historical scenes.

Ricketts also published five drawings with this signature, and with a caption, in the elusive cheap magazine The Alarum. These were intended as cartoons, and contained a rather long text that was meant to be a joke of some sorts. The 'slaves' drawing was not published in that magazine.

It may have been intended for The Alarum, that was stopped short after six months in March 1887. Many other magazines at the time contained such 'funny' drawings, such as Judy. Ricketts tried his hand at this type of illustration, although he would soon find out that his specialty lay with costume drawings and historical sketches of Egyptian, Roman, and Renaissance scenes.

This drawing clearly is a sketch for the kind of drawing that he wasn't excelling in, but that might bring in money. The scene displays his knowledge of Roman history, architecture, and  dresses, build up as a classic composition with two diagonal lines (from bottom left to top right and from top left to bottom right). Ricketts's sketch of the black maid holding a large parasol and the woman in front of the little group shows delicately drawn details, especially those of the patterns of the fabrics. The woman in the middle, in contrast, wears a plain shirt, so that the other two stand out more. The architecture is sketchy, with a partly depicted statue of Dionysus, some people in the background, and a man sitting on a bench to the right of the drawing (again showing a costume pattern).

The white spaces in the drawing would have been filled in by the engraver: thinly drawn lines indicate the artist's intention. The drawing can be dated to 1886-1887.

The capture on the back was first written in pencil, and then traced in black ink. It cannot be established who wrote the text. Was it given by the magazine's art editor, or invented by the artist?

Thanks are due to Dennis T. Lannigan, who provided the images after he acquired the drawing at Dominic Winters Auction. Lannigan is a collector of nineteenth-century British drawings. He donated part of his collection of Pre-Raphaelites and their contemporaries to the National Gallery of Canada. The collection comprises drawings by Edward Burne-Jones, John Everett Millais, William Holman Hunt and Dante Gabriel Rossetti, and others. Lannigan, an oral and maxillofacial surgeon by profession, has been a collector of drawings for over  forty years.
Posted by Paul van Capelleveen at 12:30 AM