In response to my previous blog, I received some comments with more information that will allow us to get a fuller picture of Percy Nicholls and his Russian wife Matromia.
Nicholls and his wife joined the household of Ricketts and Shannon in January 1924 and after Ricketts died in 1931 they continued to care for Shannon, moving house with him to Kew where the artist died in 1937.
In his letters Ricketts regularly mentioned Nicholls, who clearly loved cats and the wireless:
Nichol[l]s, our excellent man, has stolen a charming half persian cat [...] This cat is amiable and affectionate it literally prevents one's watering the garden, by playing with the water, or else by caressing one[']s legs [...] and of course sleeps full length on anything newly planted. [...] A Wireless is being placed this moment to supply Nicholls with rag times & L[l]oyd George Speeches.
[Ricketts, letter to Mary Davis, June 1924]
During his trip to Canada and the United States in 1927, Ricketts bought stamps for the apparent collector of them, Nicholls:
I enclose a packet of Collonial [Colonial] stamps for Nicholls. I have bought him a packet of Canadians as well [...]
(Ricketts, letter to Charles Shannon, 4 November 1927)

Percy Harold Nicholls was born in Wotton-under-Edge on 27 September 1890. His parents were Charles Beames Nicholls (1860-1915) and Alice Matilda James (1865-1931). In 1911 Nicholls was married to Lilian Daisy Blatch. At the time he was a private in the Scottish Rifles stationed in Colchester. The pair had three children: Hubert (1912-1913), Olive (1915-1985), and Joan (1921-1922). His wife died in August 1922, and he remarried the following year, on 28 April 1923, when he was listed as a Butler/Valet. His second wife, Matromia Kondratenka, was born in Russia (probably in Ukraine) on 22 November 1884. She was a domestic servant, and both she and Nicholls were then living at Chessington Hall, a country house in Surrey. Apparently, when they moved in with Ricketts and Shannon as their servants, they did not bring the only surviving daughter from Nicholls's first marriage with them.
However, after Shannon's and Nicholls's accident some family members came to assist Ricketts:
Did I tell you there is hope of a cousin of Nicholls coming here as house maid. I hope so, the family seem worthwhile though his young daughter proved a failure. I understand she is doing well in her new place.
(Ricketts to Mary Davis, 1930)
This was Olive, who was fifteen at the time.
Nicholls was mentioned in Ricketts's will. After Shannon's death, the Nicholls lived at 35 Jedburgh Street, Clapham Common (1939 census). That year Percy Nicholls received a copy of  Self-Portrait taken from the Letters & Journals of Charles Ricketts that was compiled by Thomas Sturge Moore.


Percy Nicholls died in Clapham Common on 19 October 1947. He left the considerable sum of £1310 3s 11d to his wife and to the future husband of his daughter (Francis James Garrison, a locomotive fireman). Matromia Nicholls died in 1974.
It is highly likely that the assistant in Ricketts's studio, filmed for a D'Oyly Carte Promotional Film in 1926, is Percy Nichols. 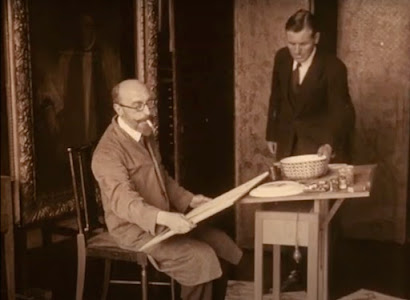 The preliminary study for Shannon's painting The Wise and Foolish Virgins (see last week's blog) in the Herbert Art Gallery & Museum in Coventry was donated by his brother Alfred Edward Nicholls (1897-1969) and his wife Lillian Williams.
[Thanks are due to Mike Gunnill who asked the question about Nicholls and to Steven Halliwell and John Aplin for their information.]
Posted by Paul van Capelleveen at 12:30 AM