Charles Ricketts's images for Thomas Sturge Moore's poem Danaë (1903) are wood-engravings, for which the artist, as he usually did, made carefully prepared and considered sketches that are now in the British Museum. Each image depicts the heroine of the story, and although the poem also includes scenes of her exile, the images do not. Danaë is only depicted as a lonely young woman in the brass tower. The nurse (or 'crone') has not been visualized by Ricketts. The only other one present is Zeus, be it in the form of sun rays.

Ricketts worked on these illustrations in the Spring of 1902. His diary notes reveal that he engraved the series of illustrations on 17 April 1902. In July he finished at least one of the blocks.

Did he read Moore's text before he designed the illustrations for Danaë? Moore reworked the poem so heavily that it became twice as long as the original text that was published in The Dial (Number 3, 1893). Moore later testified that Ricketts had asked him to write a longer version for the book he had in view. Moore may have finished the text before Ricketts made the illustrations, however, Ricketts may also have finished his designs before Moore edited his poem.

The titles are:
(1) In polisht walls a sister found is kissed.

(3) Danaë at her twilit lattice ponders.

The titles of the illustrations are a bit of a riddle. I don't think anyone has remarked that they look like quotations - probably, they are generally assumed to be just that. They certainly look like quotations from the poem. The words are completely in style with Sturge Moore's poem that piles up 'thy' and 'ye' and 'hath' and 'claimeth' and 'thee' and 'thou'. There is also a similar grammar, Moore's text includes many inversions; we find a few in the titles as well, such as 'a sister found'. The titles for Ricketts's images seem to have copied this characteristic from the second version of Moore's poem (the Dial version is less complicated).
Typographically, the titles resemble Moore's own verses as well. They have been printed in the same typeface. The whole book has been printed in the so-called King's Fount, a hybrid type that unites uncial like characters and roman type. The typeface, designed by Ricketts, integrates text and image titles, enveloping the whole in a gothic atmosphere. The titles have been printed in red, as are the marginal notes, the page numbers, the introduction, the colophon, and the running title, but they have been separated from the text by the use of a paragraph mark at the beginning of each title. The paragraph mark does not occur anywhere else in the book. 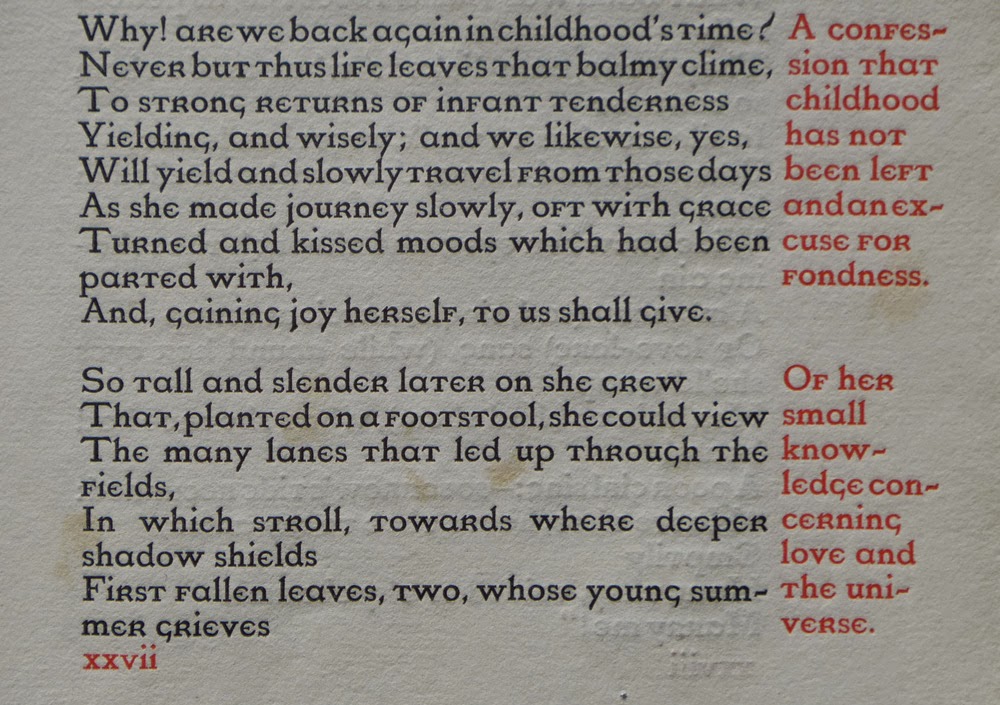 'Polisht', 'a sister found', 'beholding', 'twilit', 'ponders': Moore could have written these titles.

However, as each reader of the poem knows, these words do not occur in the verses of Moore's poem; that is, not in the original 1893 edition (which is almost exempt of Moore's later antiquating phrases), nor in the 1903 edition of Danaë.

My guess would be that the titles have been provided by Ricketts himself. This is supported by the images, as they can not be traced back to particular verses of the poem. The scenes depicted by Ricketts are inspired by Moore's words, but do not actually occur in the poem. For example, the title 'In polisht walls a sister found is kissed' may refer to a scene in the poem that twice uses the word 'polished'. In these verses, Moore calls Danaë's mirror image a 'sister' (but also 'her companion-self', or 'the twin'), and although the word kiss is not used, the action is mentioned: 'she [...] bunched up her lips to meet the lips outthrust to them' (page xi). On the other hand, 'She kneels in awe beholding lavish light' and 'Danaë at het twilit lattice ponders' are far more removed from the text than one would think.

The images and the titles form a separate story that runs parallel to Moore's poem. Ricketts never simply 'illustrated' literary works, he added interpretations, symbols, atmosphere, demanding his own part of the work of art that constitutes an illustrated book.

This also explains why certain accessories that are mentioned in the poem can not be seen in the images. The images do not illustrate Moore's poem about Danaë, Ricketts's images illustrate the original myth of Danaë, or his own version of it. The antiquated titles are meant to blend the images in with the text, to unite text and images. Not only do the images not really illustrate Moore's poem, they are not compatible with each other. Granted, the figure of Danaë seems to be consistently depicted, but the room is not the same room in the three engravings.

It is impossible to sketch a floor plan that agrees with all engravings. In one of them, the bed is in the far end of the room, with a round window to the left wall; in another one, the bed is to the left and the window on the opposite wall, while in a third another type of window is just above an alcove with cushions that might have been the same as that in the second engraving, but then the position of the bed and the other window have become mysterious.

Ricketts did not even try to picture Danaë in a particular room. He shows Danaë in three independent situations that convey claustrophobia, loneliness, and hope, as in each of the images a hint of her future freedom, and companionship, is given: (1) she kisses her mirror image, (2) she receives Zeus's light, and (3) she stands on a step ladder to look out of a small window to see the surrounding landscape and the people in it. This ambiguous imagery - lonely Danaë is not really alone - integrates the story of her imprisonment with the myth of her giving birth to a demi-god, and the story of her escape.

Edward Hodnett's criticism that the last image is redundant and that Ricketts should have illustrated more dramatic scenes (her sea voyage, or her escape), ignores the fact that Ricketts build a sequence of his own: Danaë meets herself (in a mirror image), Danaë is visited by Zeus (in the form of a golden light), and Danaë sees companions who are outside. The first image confirms her strenght, and her wish to survive; the second image makes an end to her solitude; and the third image looks forward to a return to society, and to her future freedom.
Posted by Paul van Capelleveen at 12:30 AM