The three vignettes Ricketts designed for the deluxe editions of Oscar Wilde's De Profundis did not originally include that of the star over the ocean. First there was another third vignette, which I will deal with next week. So the vignette best known by its frequent later use is an afterthought, a replacement.

It is the only vignette derived directly from the text, as I wrote in blog 503 (17 March 2021) and perhaps that is because of the need to come up with a new design. There is an older vignette that may have served as an example. Looking for inspiration, Ricketts may have thought of a circular vignette used for the cover of William Allingham's Evil May-Day that was published in 1882. The title poem is about growing up in an age of science after the death of god, but Allingham opposes atheism and science's 'rigid formulae':
The rose, the primrose, and the hawthorn-flow'r,
The colours of the dawn or evening air,
The woodlands, and the mountains, and the meads,
Lakes, rivers, rivulets and rocky springs,
The varying ocean and the starry night,
Have in their beauty more significance
Than tabulated light-waves which impinge
On optic nerves and yield the brain a sense
Of red, blue, yellow - Science knows not how.
The vignette seems to be an illustration of that line: 'The varying ocean and the starry night'. 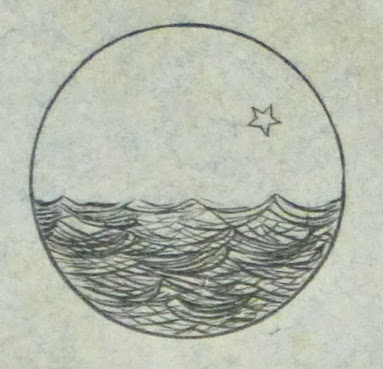 The appeal of this vignette was its connection with the Pre-Raphaelites, especially Dante Gabriel Rossetti, who probably had the greatest influence on Ricketts's early views on art and book design, along with James McNeill Whistler. Several of Ricketts's designs for bookbindings from the early 1890s can be seen as responses to Rossetti's decorations. Allingham brought Rossetti very close; he was a long-time friend of his and Rossetti designed some illustrations for his work. Only a watercolour remains of a design for a binding of Allingham's Day and Night Songs; it was not used for the binding in 1854 (it was used for a later book, but by then Rossetti was already dead).
Rossetti had designed circular devices for several bindings such as Algernon Charles Swinburne's Atalanta in Calydon (1865) and Songs Before Sunrise (1871).
The friendship between Rossetti and Allingham had cooled by 1867 and it is therefore not likely that the vignette of Evil May-Day was designed by Rossetti, although it has been suggested from time to time (frankly only by antiquarian booksellers who have a certain interest in it - see footnote). Apart from that, Rossetti had died on 9 April 1882 and Allingham received his first copies of Evil May-Day in the first half of December of that year.
That said, for a fan like Ricketts, even the meagre association with Rossetti may have helped, and, in any case, the similarities between the vignettes are striking: a lone star above an endless sea. Ricketts's rendering of the turbulent water is less realistic and shows traces of Art Nouveau.
Footnote:
Neither William E. Fredeman - in his Pre-Raphaelitism. A Bibliocritical Study (1965) - nor Mark Samuels Lasner - in William Allingham. A Bibliographical Study (1993) - have identified the  designer of the vignette.
Posted by Paul van Capelleveen at 12:30 AM