The second vignette on the cover of Oscar Wilde's De Profundis (1905) - that is: the two deluxe editions, bound in buckram (200 copies) or vellum (50 copies) - depicts a free bird against the night sky. With its wings spread, the dove flies upwards, its beak open; on the left, a star stands above the landscape.

The copies bound in buckram show that the texture of the fabric does not do the image justice; Ricketts must have had a finer fabric in mind, or designed it for the vellum edition. For comparison, here are the images on vellum and on a wrapper of two volumes of Oscar Wilde's collected works from 1908. 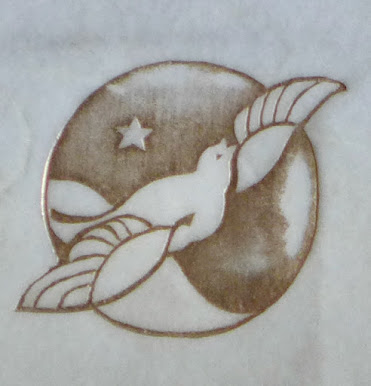 The replica of the block used for Stuart Mason's Bibliography of Oscar Wilde (1915) shows a different image. 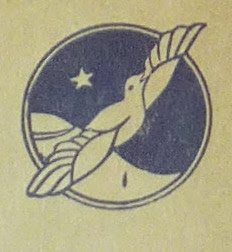 There is an additional border framing the circular image.

In the original image, the left wing (right for us) is depicted loosely, so that the bird's opened beak is clearly visible, the pigeon's head tilted backwards. The cry of joy for the regained freedom that is expressed in this way is absent from the copy.

Ricketts drew the tail of the bird moving upward at the end. To separate the shape of the bird from the landscape that begins at the top left of the tail and continues right under the wing (using a kind of yin-yang image) he drew a clear gap between tail and landscape. In the copied drawing, the tail has disappeared; we no longer see a flowing line from the head to the tail of the bird.

Finally, in the landscape below the dove, there is damage to the block. It looks as if the dove is losing a drop of blood - contrary to what the image is meant to symbolise.

One might think that publisher Methuen had to make new blocks in the course of years, but that is not the case. When Ricketts's vignettes were used again in 1922, for a work that was wrongly attributed to Oscar Wilde, For Love of the King (1922), the original images from 1905 turned out to be intact.

This second vignette, like the first (see blog 501), is a rough adaptation of Ricketts's subtle drawings.
[Thanks to Robbert-Jan Henkes for his astute comments.]
Posted by Paul van Capelleveen at 12:30 AM