A fourth instalment about a vignette on the Ricketts-designed bookbinding of the two deluxe editions of De Profundis by Oscar Wilde (1905) and Stuart Mason's Bibliography of Oscar Wilde (1915) may come as some surprise, as there are only three vignettes. However, there are several reasons for a sequel: the reuse of the first vignette in the 1940s (the escaping dove), the inspiration for the third vignette (the star over the sea) and a fourth vignette not used for this book but designed at the same time as the other three.

Let's start with the reuse of the vignette that shows the dove flying out from between the bars. Methuen, who issued De Profundis in 1905, published a separate, sewn-in edition of The Ballad Of Reading Gaol in 1910. This was the first separate printing since the author's death, and it included a shorter version 'for the benefit of reciters and their audiences who have found the entire poem too long for declamation', as Robert Ross explained in his editorial note.

The cover was adorned with Charles Ricketts's vignette of the escaping dove. (See blog No. 501.)

Toward the end of World War II, The Unicorn Press, a publishing house in London, began reprinting the works of Oscar Wilde and other decadent authors. Apparently these editions were not sent to the English copyright libraries; not all of them are included in the British Library collection. There were several publishing houses in London called the Unicorn Press. The first was the publisher of the magazine The Dome (1897-1900). Ernest J. Oldmeadow was the manager of the firm that was based at 26, Paternoster Square, and later at 7, Cecil Court. Founded in 1895 (as far as I know), it stopped publishing in 1908, and was probably dissolved around 1916. The second firm with this name began publishing in 1931 and existed until about 1938. This probably was not the same firm: it was owned by John Heritage, who also owned The Union Press. (By the way, Oldmeadow was still alive at the time, he died in 1949).

The third Unicorn Press began publishing in 1944 with an edition of Oscar Wilde and existed until the early 1960s. Its director was Martin Secker (1882-1978).

According to John Trevitt, writer of the article about Secker in the Oxford Dictionary of National Biography, Secker's original firm was sold in 1936, and continued under the name Secker and Warburg, and Secker stayed on to oversee production until 1938. Trevitt states: 'Secker then created the Unicorn Press, which published Arthur Symons's book on Aubrey Beardsley, Robert Hichens's The Green Carnation, and a collected edition of Oscar Wilde. He bought the Richards Press in 1937, formerly run by Grant Richards, his only close friend in British publishing [...]' It seems the chronology here is wrong, as the Unicorn Press books mentioned in his text were all issued after 1944. (Due to the lockdown, I have had no access to D. W. Collins's biography, published in British Literary Publishing Houses, 1881–1965 [1991]).

The publishing house was located at number 8, Charles Street near St James Square in London. June 1944 saw the first of a series of Wilde editions published by The Unicorn Press: Lady Windermere's Fan, A Woman of No Importance, An Ideal Husband, The Importance of Being Earnest. Four Plays by Oscar Wilde. For the cover, the decorations designed by Charles Shannon for the first edition of the latter play were used. It was very successful and six reprints appeared. The same year, The Ballad  of Reading Gaol was also produced. It was followed by Intentions (February 1945), The Picture of Dorian Gray (November 1945), The Profundis (probably also 1945), Salomé (1947), Lord Arthur Savile's  Crime and Other Stories (1948) and A House of Pomegranates (1949). In 1951, an edition of Poems was in preparation, but it seems never to have appeared.

Of these books, The Picture of Dorian Gray and Intentions imitated Ricketts' s original binding designs. The same applied to The Profundis, which brought about the reappearance of the escaped dove, the vignette Ricketts designed for the first regular edition and its subsequent reprints.

And here we encounter the renegade design again. This is quite puzzling, as the designs of The Picture of Dorian Gray and Intentions do appear to be neat reproductions of the original covers. Here, however, the publisher did not take notice of the first printing of De Profundis; instead, he relied on Stuart Mason's bibliography of Oscar Wilde (1915). This is also evident from the advertisement on the back of a Richards Press/Unicorn Press collaboration with the University of Kansas Press: Frederick L. Gwynn's monograph Sturge Moore and the Life of Art (1951). The back of the dust wrapper advertised "The Unicorn Press Edition of the Works of Oscar Wilde". The text was surrounded by the three imitation vignettes on the binding of Mason's book. The same advertisement appeared on the cover of Charles Richard Cammell's Aleister Crowley. The Man, The Mage, the Poet (1951). 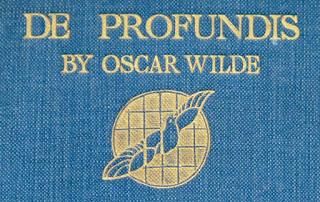 However, a 'Note' at the front of the book states: 'The small device on the cover, taken from the first edition, is the work of the late Charles Ricketts, R.A.' Although that vignette was the inspirational source, this device is the recreated version by an anonymous craftsman.

The blocks for these vignettes must have been transferred from the publisher of Mason's bibliography, T. Werner Laurie to The Unicorn Press, or new ones may have been made. They have the identical format, but the one of the free bird has been cleaned: the drop of 'blood' (bottom centre) has been removed.