In 1914, Stuart Mason (pseudonym of Christopher Sclater Millard, 1872-1927) published his Bibliography of Oscar Wilde in a regular one-volume edition and in a limited deluxe edition of one hundred numbered and signed copies. Publisher Thomas Werner Laurie had started his business in 1904, and issued the bibliography as if it belonged to the first edition of Oscar Wilde's collected works. The design of the books was almost identical, especially the deluxe edition whose white linen bindings with gold printing imitate those of the multi-volume collected edition. The calligraphy of the titles - designed by Charles Ricketts - is not copied, but replaced by a typeset title. Ricketts's three vignettes with doves, stars and the sea adorn the front cover, dust jacket and endpapers.

The collected works were published by Methuen and Co. in 1908. The design by Charles Ricketts was the same as the one he especially made for the first edition of De Profundis in 1905. The regular copies of that book were issued in blue cloth with one vignette, the two deluxe editions had three vignettes.
Stuart Mason's 'Preface' acknowledges Methuen's rights to the design:
Thanks and acknowledgments, formal though none the less sincere, are due to [...] Messrs. Methuen & Co., for many courtesies, including permission to use the designs on the cover of this volume; [...].

Methuen still used the designs for reprints, especially the star in the sky above the 'great waters', while the one with a dove escaping through prison bars was best known from the reprints of De Profundis. The third design (all were described by Mason in his bibliography) is 'the bird flying free'.

The dove escaping through prison bars

Remarkably, Methuen's original binding tools have not been used. New, different stamps have been made that more or less resemble the earlier ones, but they lack all subtlety. They are, frankly, rather crude imitations. 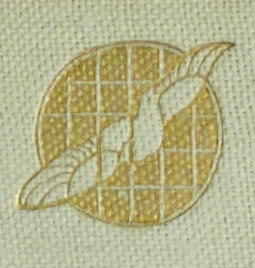 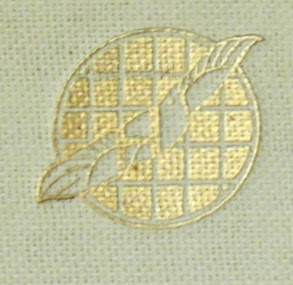 The most striking difference is the drawing of the bars over the pigeon's body; they are much too thick in the new block, and have a crossbar that is not there in the original. As a result, there is actually no opening for the dove to fly through.
The transition from the pigeon's breast to the right wing is also too thickly accentuated, so that it is no longer visible that the pigeon is opening its beak, in other words, gasping for breath.
Above the left wing, against the circle, Ricketts drew a larger open space in the original design than was done in the reproduction. There, just above the wing, a horizontal bar has been drawn.
All these changes show that the new block maker did not understand that the design depicts not a captured dove, but a dove escaping, symbolising freedom. All the modifications actually restrict the pigeon's freedom of movement to such an extent that its spread wings can no longer be understood. The image now resembles a bird that has been pinned to the bars.
Posted by Paul van Capelleveen at 12:30 AM