The third vignette on the deluxe editions of De Profundis, published in 1905, depicts a tempestuous sea with six high waves; above, in the centre, is a bright star in the sky.

The combination of three vignettes (see blog 501 and 502) was reused in 1908 for the "First Collected Edition" of the works of Oscar Wilde.
Whereas the other two vignettes were related to Wilde's imprisonment and release, the latter refers to the concluding paragraph of De Produndis:

Society, as we have constituted it, will have no place for me, has none to offer; but Nature, whose sweet rains fall on unjust and just alike, will have clefts in the rocks where I may hide, and secret valleys in whose silence I may weep undisturbed. She will hang the night with stars so that I may walk abroad in the darkness without stumbling, and send the wind over my footprints so that none may track me to my hurt: she will cleanse me in great waters, and with better herbs make me whole.
(Oscar Wilde, De Profundis, 1905, pp. 150-151).

In 1909, the first volumes of what has come to be called the Second Collected Edition were published. The first volume appeared in early September 1909, bound in green buckram: Lord Arthur Savile's Crime and Other Stories. These smaller format (foolscap) editions only used one of the three original vignettes by Ricketts, and bibliographer Stuart Mason asserted that the third vignette was used for these editions, that of the star over the sea. However, this is not entirely accurate.

The circumference of the circular vignette is now 25 mm instead of 23 mm due to the addition of an extra border. The image itself is unchanged: the star has a protruding point at bottom right, and swirls in several directions can be seen within the waves. 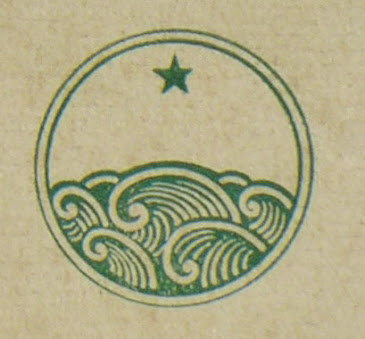 Why was the block changed for the Second Collected Edition? Perhaps Ricketts felt it should have a more distinctive border, now that it was the only vignette decorating the binding? Subsequently, publisher Methuen used it for dozens of reprints through the early 1930s, and the vignette became the best known of the three. Buyers and readers of those editions will not have realized it was a Ricketts design, for his name was not mentioned. Possibly, several blocks may have been necessary for the later reprints.

The third vignette was also copied for Stuart Mason's Bibliography of Oscar Wilde in 1915.

The large middle wave clearly has a different curve, as do the other waves around it. Of the star, only the outline remains.

The vignette has an extra round border, compared to De Profundis, 1905, and similar to the 1909 vignette.

In short: all three vignettes used for Mason's bibliography needed new drawings for the maker of the block.

The main question is: why on earth did Stuart Mason claim in his introduction that Ricketts's vignettes were used for his bibliography, when all three were copies only. Those new blocks were certainly not Ricketts's doing, as they lack subtlety and are clearly copied, not carefully drawn again.